According to abbreviationfinder, ZW is the 2 letter abbreviation for the country of Zimbabwe.

Zimbabwe’s economy has been relatively developed on an African scale, including modern agriculture, a broadly composed industry and a developed service sector – all of which have, however, suffered damage during the escalating economic crisis since the beginning of the 2000s. 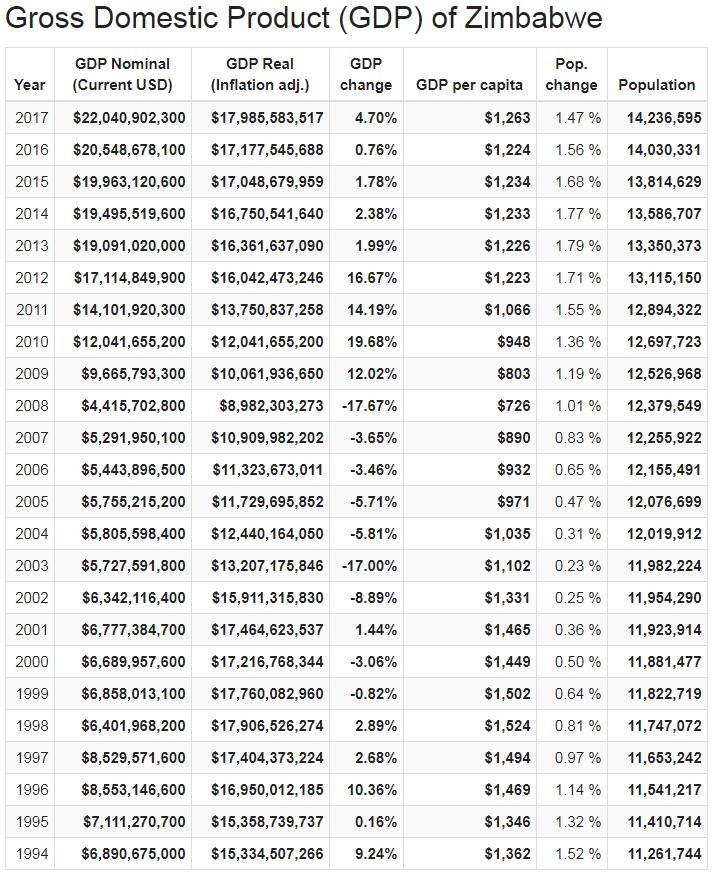 Zimbabwe, formerly called Rhodesia, became independent in 1980. The country soon became a model for the rest of Africa, with a mixed economy with partly strong growth in several sectors, and with large investments also in the social sector. Towards the end of the 1990s, the country experienced a major economic downturn, including increasing debt, falling value of the country’s currency and declining foreign exchange reserves, low investment rates, high inflation and rising unemployment – at the same time as the HIV/AIDS epidemic became seriously noticeable. Several aid donors, as well as the IMF, withheld gifts and loans to Zimbabwe, partly because of the country’s resource-intensive involvement in – The Congo Wars. The political turmoil ahead of the 2000 elections created a poor picture of Zimbabwe abroad, which severely affected the tourism industry. In the same year, large farms were taken forcibly, and production of both food and agricultural goods for export declined sharply, with negative effects on the economy as a whole, which experienced significant negative growth in the first half of the 2000s and hyperinflation from 2005.

Zimbabwe is a resource-rich country with significant mineral deposits and a climate suitable for diverse agriculture – even though only a small part of the land is suitable for efficient agriculture. One of the most successful political changes after independence has been in agriculture, with a policy that has encouraged small farmers to increase production. This has resulted in a substantial profit for sales in normally good years. However, the country has for some time needed to import food as a result of drought, eventually also due to lower production. The broad-based industry was substantially built up during the sanctions against the Rhodesian minority regime in the 1960s and 1970s, but lack of investment after that time has led to depleted means of production and low competitiveness. Major investments have been made in mining, as well as in the service sector. Until the economic crisis, with political unrest, started in the early 2000s, tourism was one of the country’s most important industries.

Since independence, Zimbabwe has received Norwegian aid at a state-by-state level, after Norway has supported the liberation struggle for several years – not least through voluntary organizations. In 2000, like many other countries, the Norwegian government decided to freeze parts of aid to Zimbabwe due to the political situation, with increasing human rights violations. State-by-state assistance stopped in 2002, but some transfers continued through international as well as voluntary organizations.

Overall, agriculture is the most important single sector in the Zimbabwean economy, with about two-thirds of the working population being employed there. Agriculture has also played a very important economic role through the production of exports, first and foremost of tobacco, which together with gold has been the country’s most important export item

Zimbabwe’s agricultural sector is more complex, with greater disparities, than in most African countries. This is because Rhodesia was a settler colony, and that the land was divided between white and black groups, the first being allocated a disproportionate share – and the areas most suitable for cultivation as well as animal husbandry. Claims for land distribution were therefore central to the liberation struggle, but have only been met to a small degree after independence, which has led to great land scarcity, overpopulation and depletion of the soil in the most densely inhabited parts of the country. The low rate of land redistribution led to increased political pressure to distribute land belonging to the so-called commercial farms (large farms substantially owned by white farmers), and the moderate redistribution policy, with compensation both by voluntary sale and forced expulsion, from 2000 abandoned in favor of forced acquisition through land occupation. This led to a crisis in this part of agriculture, which traditionally accounts for the bulk of the production traded in the market, both food production and export production. One of the success stories of the Zimbabwean economy after independence is a significant increase in the output of medium-sized black farmers, while the majority of farmers are still referred to marginal areas of slippery soil, low water and low productivity, with production substantially for their own consumption.

In addition to the important export products of tobacco and cotton, the production of maize, wheat and sugar, among other things, is significant for the domestic market, even though Zimbabwe has had good corn for export for good years. Other important products are peanuts (peanuts), soybeans, tea and coffee, the latter also for export. The horticultural sector was strongly developed in the 1990s, as one of the country’s leading growth industries, but has declined as a result of the economic crisis since the beginning of the 2000s. The production of fruits and vegetables, as well as flowers, is one of the most complex and extensive in all of Africa, but Zimbabwe has a competitive disadvantage of long sea transport and expensive air cargo to the US and European markets.

More than 8 percent of land is suitable for agriculture; almost 13 percent are grazing land. The main livestock are cattle and goats, and Zimbabwe is one of the few African countries with access to export meat to the EU. Otherwise, meat is exported especially to South Africa.

Zimbabwe has large forests. Most of the logs go to fuel, charcoal, but some are also used as wood pulp in the industry and for building materials.

In lakes and rivers there is also considerable fishing, especially in Kariba.

Zimbabwe is rich in minerals, and mining is of great economic importance to the country, although the contribution to gross national income (GNI) has varied greatly in recent years, both as a result of uneven production and fluctuations in international prices. Among the approximately 40 different minerals that are mined, gold has the greatest value, and in some years has accounted for about half of the country’s export value. Zimbabwe opened its own gold refinery in 1989. In the early 2000s, nickel was the second most important mineral, measured in terms of export value. Traditionally important asbestos exports declined significantly from the 1980s as a result of declining international demand. platinum, Copper and cobalt are other important minerals for export, while the recovery of coal great national value, as an energy source, the production of both electricity and oil. It is considered to have considerable potential in several minerals; including platinum and diamonds.

Before independence, Zimbabwe developed significant energy production together with neighboring Zambia, through the containment of the Zambezi River in the artificial lake Kariba and the construction of power installations there. In combination with several other power plants, including the coal-fired heat plant in Hwange, Zimbabwe became self-sufficient in 1987 in electric power, but has still had to import energy to meet domestic demand. Oil is largely imported and transported in a pipeline from Beira in Mozambique to Mutare. Energy deficits, mainly due to currency shortages, contributed to the economic downturn from the late 1990s.

The industry is relatively well-developed on an African scale, with a wide breadth – from the heavy and chemical industries, through to the processing of agricultural products and minerals, to light consumer goods production. Much of the industry was established as a counter to international trade sanctions implemented against the former Rhodesia in the 1970s, and the country was far from self-sufficient with industrial products. The modest size and low purchasing power of the domestic market, as well as persistent currency shortages and low investment in the productive sector, contributed from the late 1980s to weakening the industry, which was not modernized. Establishing separate zones for export-oriented production contributed to a partial upswing in the 1990s. However, the economic crisis of around 2000 led to further weakening of the industry and many companies were closed down. The industry is mainly located to the major cities, especially Harare and Bulawayo. The most important is the chemical, metal, textile, food and tobacco industries. The industry (together with mining) accounted for 32 percent of GDP, and employed about 5.5 percent of the workforce in 1998. In 2017, the industry accounted for 22 percent of GDP and employed 7 percent of the workforce.

Zimbabwe has a deficit in the foreign trade balance for most years, and revenues are vulnerable to fluctuations in the prices of the country’s most important export goods, tobacco and gold. Other important export goods are nickel, ferro alloys, cotton, fruits and vegetables, as well as occasionally corn and sugar. According to Countryaah, major trading partners are South Africa, the United Kingdom, Japan, Germany and the United States. Zimbabwe has been a significant recipient of foreign aid, including from Norway, but several countries have reduced or halted transfers from the late 1990s as a result of political developments in the country.

Zimbabwe has a relatively well-developed communications network, although parts of it have fallen into disrepair as a result of the economic crisis. The road and rail network is relatively well developed, with over 90,000 kilometers of public roads connecting all major as well as most smaller cities. The national railway network, at approximately 3500 kilometers (2014), is connected to all neighboring states. The railway takes most of the heavier goods transport, mainly through Botswana to South Africa. Zimbabwe has no ports of its own, but uses Beira and Maputo in Mozambique, Dar-es-Salaam in Tanzania and several South African ports.

In the 1980s, among other things, with Norwegian assistance, efforts were made to develop the so-called Beira corridor between Mutare in Zimbabwe and Beira in South Africa, as well as Beira port, to reduce dependence on the apartheid state of South Africa. During the civil war in Mozambique, the railway and pipeline network through the Beira corridor became subject to frequent acts of sabotage. The South African regime also sabotaged Zimbabwe’s foreign trade through South Africa.

There are international airports in Harare and Victoria Falls, and several small airports for domestic traffic.