Bonaire – The diving paradise with an adventure profile! The Dutch Caribbean island of Bonaire is known as the divers’ paradise. The island has relatively few beaches but is perfect for you who are looking for an active and close to nature holiday. Here also rests a calm and welcoming atmosphere. If you want to experience diving and snorkeling, Bonaire is a given alternative. Here you will also find a wide range of other outdoor activities such as cycling adventures, horse riding, kayaking and windsurfing. For longer excursions on the island you usually need a rental car.

For many people, Barbados has always been the epitome of a Caribbean island paradise. Here you will find fantastic beaches and the friendliest people imaginable. The nature is magnificent and along the coast you will find not only beautiful beaches but also dramatic rock formations and wonderful coves. Barbados has many faces and is a complete destination for those who love exciting nature experiences, but the island is also an excellent destination for those who may just want to take it easy in the shade of a palm tree. In Barbados there is really something for everyone – for those who like nightlife and Caribbean tones, the bar and restaurant life is well developed and for those who like to move around, there is a large selection of water sports activities. If you want to see a little more of the local life on the island, it is also perfectly possible to use the local buses.

For those interested in nature, the stalactite cave Harrison Cave with waterfalls and underground lakes is well worth a visit. Those interested in food and drink can take advantage of the Mount Gay rum distillery, which produces what many consider to be one of the world’s best rums. Those who love water sports can, for example, visit Silver Sands Beach on the south coast, which is windsurfers’ favorite beach. There is so much to do in Barbados! Those who want a little variety from beach life can also visit the capital Bridgetown, which is not bigger than you have time to explore it during a day trip.

As one of Caribbean countries defined by Countryaah, Barbados was once a British colony but is today an independent island state. However, some British phenomena such as cricket, horse racing and afternoon tea are still very popular, which gives the island’s cultural life a special charm. Barbados has a rich history, wonderful nature, well-developed service and a welcoming atmosphere – all the ingredients that make for a successful holiday!

With its palm-lined white beaches, turquoise waters and gentle sea breezes, Aruba is a dream destination for many Swedes. Here you will find a place in the sun with sparkling beaches and crystal clear water – Aruba really lives up to its reputation as a Caribbean paradise. It is sunny all year round and the water rarely gets colder than 25 degrees. Hurricanes and thunderstorms are uncommon and precipitation is low. Anyone who longs for sun, swimming and heat can travel here at any time during the year.

Arubas has a rather varied history and possesses a diversity that is reflected in the local cuisine, architecture and the warm, friendly population. The island’s first inhabitants belonged to the Arawaki tribe from the South American mainland, but over the centuries, people from different parts of the world have come to populate Aruba, as well as elsewhere in the Caribbean archipelago. Before the Dutch takeover in the 1630s, the island belonged to Spain. In the early 19th century, Aruba was also occasionally occupied by Britain. However, the official language of the island is Dutch because the island still belongs to the Netherlands, even though Aruba today has a far-reaching independence.

Aruba’s flag shows a white-edged red four-pointed star against a blue background with two horizontal yellow stripes at the bottom. The red star symbolizes the island itself surrounded by blue water. The yellow ribbons symbolize abundance, the red color of the star represents love and its white edges the chalk-white beaches that surround the island. Love lined with white beaches in a turquoise sea – it’s Aruba.

The Caribbean island of Antigua is known for its beautiful white beaches and turquoise waters. There are 365 beaches and during your holiday you will surely find your own favorite. Antigua, with its long white beaches and crystal clear waters, is a favorite destination for honeymooners. The island is truly something of a “tropical paradise” and the beaches lack the crowds you often find on the Mediterranean. Antigua is also suitable for families with children and there is plenty to do on the island – in addition to relaxing on one of the divinely beautiful beaches. Why not try kitesurfing, jet skiing, snorkeling, deep sea fishing or canoeing? You can also rent a car and discover the island on your own. Antigua is also an exciting island for the historically interested. In the surroundings of English Harbor on the southern part of the island you will find, for example, Nelson ‘ s Dockyard which was an English naval shipyard in the 18th century. Nelson’s Dockyard is located in a national park that also includes the Shirley Heights cliff from which you get a completely wonderful view of the surroundings. The British influence is evident on the island and villages and bays bear names reminiscent of Britain. About half of the island’s 60,000 inhabitants live in the pleasant capital St Johns, which is a fairly small town that is also well suited for exploring on foot. There are many boutiques and wine bars where you can slip in for a glass. By the harbor is the popular Redcliffe Quay with its cozy restaurants, small shops and bars. At the end of Market Street you will find the lively and colorful market filled with exotic fruits, vegetables and fresh fish. 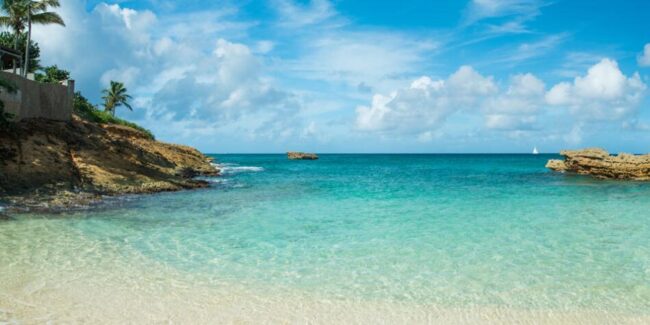 The Caribbean island of Anguilla is a true paradise island for anyone seeking peace and quiet in the beautiful Caribbean archipelago. Here you will find chalk-white beaches and small cozy restaurants that, among other things, serve the island’s main delicacy – lobster. Here you can take the day as it comes and enjoy the gentle breeze from the sea. In addition to its pristine beaches and stunning coral reefs, Anguilla is also known for its relaxed and hospitable population. Anguilla is one of the least exploited islands in the Caribbean and hotels and restaurants maintain a very high standard. Therefore, a stay in Anguilla makes for a wonderful experience.

Anguilla is just a 20-minute boat ride from the island of St Martin (Sint Maarten), where the region’s international airport is located. From St. Martin, ferries to Anguilla run every half hour for most of the day. The largest city and also the capital of Anguilla is called The Valley. However, this is not a major metropolis. Entertainment and shopping are instead mostly scattered on the island, often adjacent to the beaches and hotels.

The ruined city of the same name, located in the Tikal National Park, is one of the most famous Mayan sites with more than 3000 temples, palaces and residential buildings. The Maya left the place more than 1000 years ago. The national park covers an area of ​​575 km² and has the largest area of […]