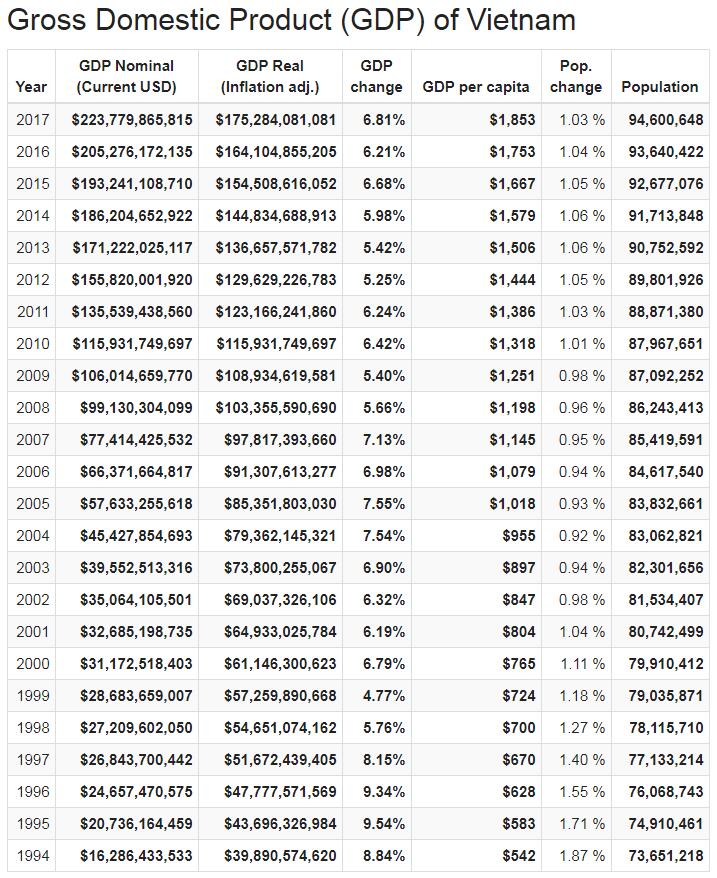 In 1954, North Vietnam introduced a centralized Soviet-style planning economy. After the reunification in 1976, this was also partly introduced in the south. In 1986 began a series of market economy reforms under the name Doi Moi, ‘renewal’. Although reforms in many areas have been small and met with some considerable resistance in the bureaucracy, the economic results have been formidable. For example, in just a few years, the country went from being a major importer of rice to becoming the world’s third largest rice exporter. Annual growth in the economy has been strong. Since the starting point was very low, the country has been very poor until the 2000s.

The area around Ho Chi Minh City is the country’s most important economic center, followed by the Hanoi – Hai Phong area. Also Da Nang is experiencing rapid economic growth. In the mountainous areas in the north, in the central highlands and in the coastal areas along the southwest bank of the Gulf of Tonking, poverty is widespread. Eight percent of the population lives below the poverty line.

More than half of the labor force was employed in the primary industries in the period from 1954 to 2005, and Vietnam was still far from an agricultural community. However, the industrial sector grew significantly compared to other poor countries. The service sector was still relatively weak. In the international context, Vietnam could traditionally be categorized as an equal society with relatively even distribution of income. However, signs of increased income inequality have become clearer after 2005.

Primary industries contribute 15.3 percent of GDP and employ 25.7 percent of the working population (2017).

The main agricultural products are rice, coffee, rubber, tea, pepper, cashew nuts, soybeans, peanuts, bananas, corn, sweet potatoes, cassava, jute, cotton and sugar cane. Rice is grown on 82 percent of the arable land. 52 percent of rice production takes place in the Mekong Delta in the south and 18 percent in the Song Hong Delta (Red River) in the north. Vietnam is the world’s fifth largest producer of rice after China, India, Indonesia and Bangladesh and the world’s third largest exporter after India and Thailand. The country is the world’s second largest producer and exporter of coffee after Brazil.

Water buffaloes are widely used as migratory animals. Otherwise, pigs, poultry, cattle and some goats are kept. The increase in pork and poultry production has been particularly strong during the reform years.

39.7 percent of Vietnam is covered by forests, but only two percent of these are densely populated. Deforestation has been great due to harvesting, fuel harvesting and land clearing for agricultural purposes, including coffee plantations and sweat farming. Authorities have declared deforestation the biggest challenge since the reunification, and a forest planting campaign has been launched. Timber is exported, including to China.

Fish is, after rice, the most important food for the population. Like agriculture, it also provides important export revenue, and catches have increased significantly during the reform years. Both coastal and river fishing, as well as the breeding of both fresh and saltwater fish. The fishing fleet consists mostly of smaller boats that can only fish in coastal waters. As a result, coastal waters have been affected by overfishing.

Several areas in the highlands were developed during the reform period for the cultivation of various sales growth. In the 1950s, after the French colonial power left a large class of landless peasantry, the North Vietnamese authorities organized agriculture into cooperatives and state farms. After Saigon’s fall in 1975, the same thing happened in the south. In the 1980s, the country depended on importing food, and it was close to the famine disaster in 1986.

After reforms were introduced in 1988 that eventually gave farmers free land to own land, private households have become the normal form of organization in agriculture. Cooperatives still exist in several places, most in the north, while state farms exist only in mountain areas in border areas. Although many families still suffer from malnutrition, the country as a whole is self-sufficient in food. Agricultural products also contribute important export revenues. Only 20 percent of the total area is cultivable. Access to land is therefore scarce. In relation to the population, Vietnam has one of the least available agricultural areas in the world. The average size per unit is also among the smallest in the world. The country is further plagued by floods; especially in the north where Song Hong (Red River) frequently floods its dikes.

A large-scale reconstruction of rubber plantations destroyed during the Vietnam War has been carried out with, among others, Malaysian and Taiwanese assistance.

Vietnam has some significant deposits of oil, natural gas, iron ore, bauxite, coal and apatite. Particular attention is paid to the development of oil and gas extraction. Crude oil is the country’s most important export product. In East Asia, only China has larger oil reserves than Vietnam, with reserves amounting to 630 million tonnes. The most important oil producing fields are Bach Ho (White Tiger), Rang Dong (Dawn), Hang Ngoc, Dai Hung (Big Bear), and Su Tu Den (Ruby). Coal mined mainly in the province of Quang Ninh in the north-east, about 1/3 of the production is exported.

Vietnam has been among the world’s poorest countries in terms of GDP per capita, having a relatively well-developed industry. Several foreign companies have established motorcycle assembly plants for the domestic market. Assembly plants for cars and trucks are also growing rapidly, but the domestic market for these types of vehicles is currently limited. The production of textiles, clothing and footwear for export has increased rapidly during the reform period, but has gradually faced fierce competition in the world market from Chinese products. The production of furniture and other wood products and of electrical appliances for export has also increased significantly since 1986.

With the help of foreign capital, several new modern steel mills and petroleum refineries have been built. In 2004, the state-owned enterprises, the foreign-owned enterprises and the private Vietnamese-owned enterprises each accounted for one-third of the industry’s production value. All of the foreign-owned enterprises in Vietnam are established after 1988. The three largest foreign investor countries are Singapore, South Korea and Japan. Since the authorities introduced new rules in 2000 that made it easier to register locally owned private companies, the growth of this type of business has been significant. Main industrial centers are Ho Chi Minh City, followed by Hanoi and Hai Phong. A number of smaller cities have specialized in niche industries such as silk, porcelain and furniture.

The four main export markets are:

The four main import markets are:

The railway network is at 2600 kilometers (2014), but is struggling with poor track structure, lack of modern signaling facilities and old locomotives and wagons. Between Hanoi and Ho Chi Minh City, there is a 1725-kilometer railway line known as the “reunion express”. Hanoi also has rail links with Hai Phong and China (across Dong Dang and Lao Cai).

River traffic along the Mekong and Song Hong (Red River) with bee rivers is still important for transport. The main ports are Hai Phong, Da Nang and Ho Chi Minh City. Southeast of Ho Chi Minh City, there are terminals for both container and cruise ships.

The main international airports are Tan Son Nhat at Ho Chi Minh City, followed by Noi Bai at Hanoi. Tan Son Nhat was the world’s busiest airport for a short period during the Vietnam War. In total, there are 46 airports in Vietnam.