According to Countryaah, the biggest trading partners are  India, Iran, and Qatar. 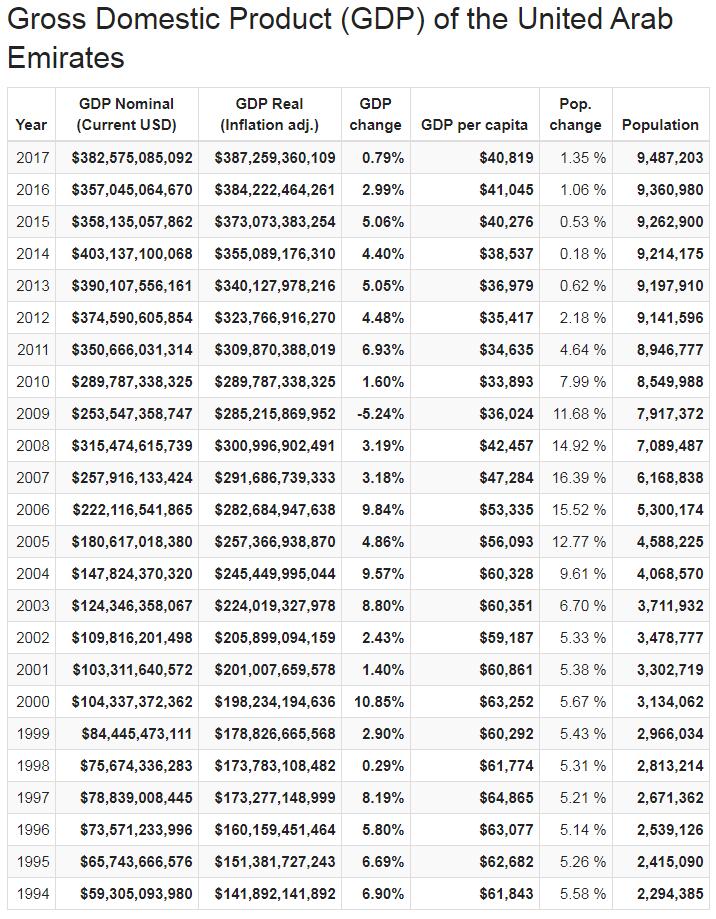 Over the last twenty years the UAE has had a particular demographic evolution: in fact, the 179,000 residents recorded in 1968 had risen to 1,622,393 at the 1985 census survey. Registry estimates in 1990 attributed to the town a population of 1.85 million residents. This extraordinarily rapid population growth is due to massive immigration of workers, attracted by the country’s wealth: it is estimated that about 90% of the workforce operating in the UAE is made up of foreigners.

Economic conditions. – With a per capita income of nearly $ 20,000 per year (1990, according to estimates made by the World Bank), the UAE ranks at the top of the list of the richest countries in the world, although in the second half of the 1980s the economy of the country has suffered some slowdowns. This was due to the fall in oil prices on international markets, which caused a contraction in oil production, which went from 98,712,000 t in 1977 to 75,430,000 t in 1988. The government, following lower revenues from oil sales (which alone finance 90% of the federal budget), has decided to downsize many ambitious development projects and abolish the gratuitousness of some social services.

During 1990 there were sharp increases in the prices of petroleum products (the prices of 35 dollars per barrel were again exceeded, albeit for short periods of time), which restored significant profit margins in producing countries. However, the crisis situation following the invasion of Kuwait by the armed forces of Iraq compromised the full enjoyment of these surpluses for the regions of the Arabian Peninsula.

The two emirates with the highest rate of industrial development are those of Abū Ẓabī and Dubai. The first, in the early 1980s, built a vast industrial complex in Ruweis – which has a deep-water port – where a fertilizer factory and an oil refinery are active. The second emirate, that of Dubai, has set up a new industrial area in Ǧabal ῾Alī, a recently built urban center located 30 km from the capital of the emirate; there are located a steel mill, an aluminum and an oil refinery, a gas liquefaction plant and also sea water desalination plants.

The Northern emirates (Ra’s al-H̱ayma, al-Fuǧayra, Umm al-Kaywayn and ῾Aǧmān) are the least successful economically. The emirate of ῾Aǧmān, the smallest, has no other resources than a small dry dock; Ra’s al-H̱ayma owns three cement factories, but still bases its economy on the agricultural sector (it produces vegetables and exports them to the other emirates), while the emirate of al-Fuǧayra adds those from fishing to agricultural income. The recent construction of a large hotel of the Hilton chain favors tourism from the other emirates. Lastly, Umm al-Kaywayn has significant reserves of natural gas.

As far as agriculture is concerned, it should be noted that this is strongly conditioned by the lack of water, the salinity of the land and the rural exodus; however, in recent years, also in an attempt to diversify production, the country has set up experimental agricultural stations and has tried to maximize the potential of some emirates, using underground water reserves and resorting to cultivation techniques of vanguard.