Uganda is a poor country but over the past 20 years economic growth in the country has been high and the development is also expected to continue to be positive. Behind the optimism lies the government’s stable economic reform policy, a guaranteed inflow of development assistance (including loans from the International Monetary Fund) and a stabilization of the world market price of coffee (the country’s most important export product). The stabilization also contributes to a sharp reduction in the number of public employees. The oil discoveries discovered during the 1990s are expected to be an important source of information in the future. 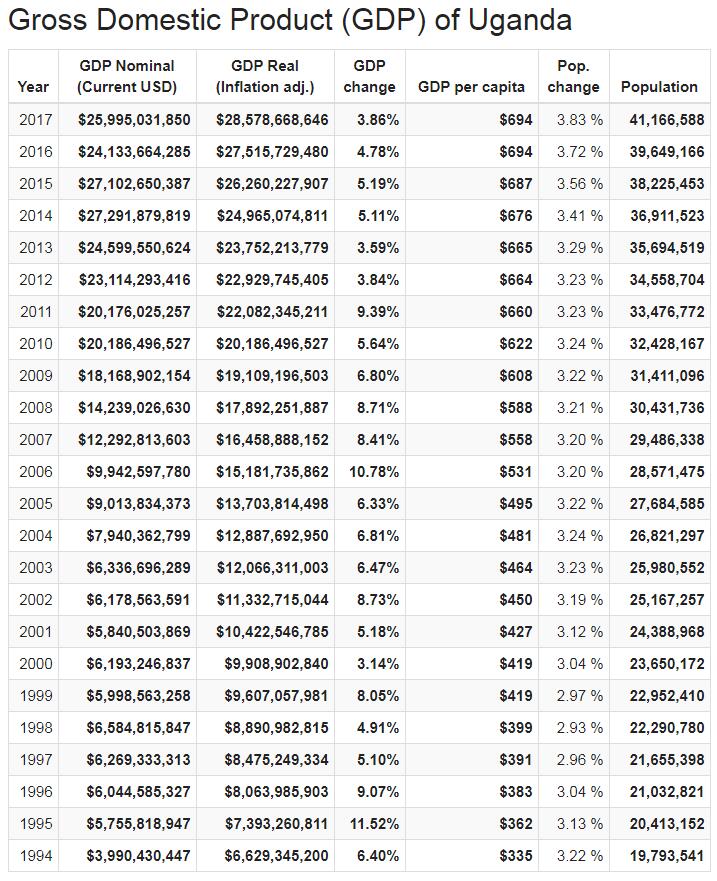 Although export earnings are no longer dependent on coffee alone, agriculture remains the most important industry. The agricultural sector employs about three quarters of the population and contributes one quarter to GDP. Fish and fish products are among the country’s most important export goods. Investments are being made in the development of tourism, mainly ecotourism, and during the 00s the number of tourists has increased significantly.

Uganda’s business sector is completely dominated by smallholder-based agriculture, which employs about 3/4 of the labor force. The length of the dry season determines the conditions for agriculture. In the middle parts of Uganda, which has only one month with less than 50 mm of rainfall, the cultivation of the milk path dominates as food crops and coffee and tea as barley crops. In addition, cotton, tobacco and cut flowers are grown for export. Most of the coffee is grown on Lake Victoria and Mount Elgon. In the northern and southern parts, with a 3–4 month dry period, fingerhirs are grown as food crops and cotton as salads. In the driest areas of the northeast, nomadic livestock management occurs, sometimes combined with cultivation of sorghum.

Uganda’s most important mineral deposits are copper, tin, gold, cobalt and iron. The important copper production in Kilembe in western Uganda ceased in 1979 and the Jinja smelting plant expired. However, the rising world market price of copper led to the production being started in 1988. Cobalt and sulfuric acid have been extracted at Kilembe since 1954. The World Bank has recommended the production of phosphate fertilizers from apatite and other phosphate minerals. Oil and natural gas have been found in the western parts of Uganda. Wood and charcoal account for about 90 percent of the country’s energy consumption. The remaining 10 percent is extracted from imported oil or natural gas and electricity, which comes from the hydroelectric power plant in Owens Fall in the Nile.

The majority of the manufacturing industry is agricultural-based (cotton, coffee, tea, sugar cane and tobacco processing). The brewery industry is also relatively extensive, and among other industries is noted the manufacture of cement, soap, plastics, steel and other metals as well as salt extraction. The industry, which suffers from a shortage of trained manpower and spare parts, uses only about 30 percent of its capacity. Regular power failure is the biggest problem. Virtually all industry is concentrated in Kampala. In the early 1990s, a privatization of industry began, and now most of the industrial companies are privately owned.

Uganda has a negative trade balance. Coffee, tea, fish, gold and cut flowers are the country’s dominant export goods. Exports of timber were halted in 1991 by environmental considerations. Imports consist mainly of capital goods, such as machinery, means of transport and oil. According to Countryaah, the most important exporting countries are Kenya, Congo (Kinshasa) and Rwanda. Import comes mainly from China, India and the United Arab Emirates.

Business According to countryaah, Equatorial Guinea, whose business has traditionally been based on agricultural production, had major economic problems until the mid-1990s. Between 1970 and 1980, the country’s GDP fell by about 6 percent per year, and Equatorial Guinea was one of Africa’s least developed countries. Large deficits in the budget and trade balance meant […]

Business Large parts of Angola’s business were razed during the liberation war and the recovery was hampered by the war situation that existed in 1975–2002. As a result of rising oil exports, the country has experienced very strong economic growth during the 2000s: the oil industry accounts for about 50 percent of GDP and 95 […]