According to abbreviationfinder, TR is the 2 letter abbreviation for the country of Turkey.

Measured by Gross Domestic Product (GDP), Turkey is the world’s 19th largest economy (2019). Turkey participates in the G20. GDP per capita in 2019 was US $ 28,264, which was higher than in neighboring northwest, Bulgaria, but lower than neighboring west, Greece. In 2019, unemployment was 11.9 percent. 21.9 percent of the population lives below the poverty line (2015). The country has a mixed economy with both state and private enterprises. The state still plays an important role in the industrial sector, banking and communication. 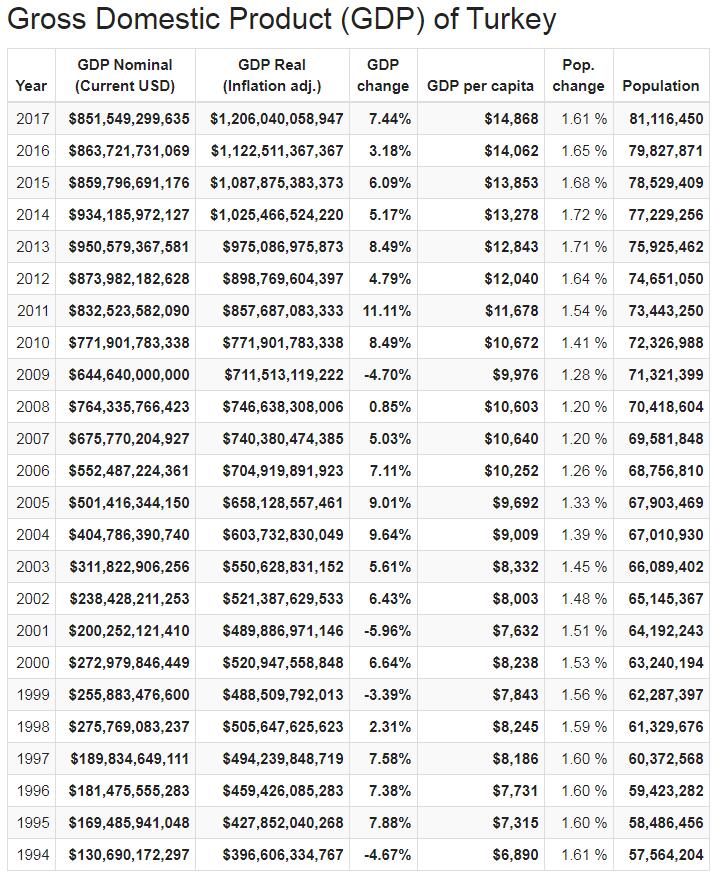 Primary industries contribute 6.9 percent of GDP and employ 18.3 percent of the working population (2019).

Turkey has almost all cultural plants that belong to the temperate and subtropical zone, and the country is self-sufficient with most common foods. Grain cultivation dominates most places. Wheat and barley are grown throughout the country, corn in the Black Sea area and around the Marmara Sea. Tobacco is cultivated especially along the north and west coasts. The production of cotton, sugar beets and tea is also considerable. Turkey has a large production and export of typical Mediterranean plants such as citrus fruits, figs, hazelnuts, apples, pears,grapes, raisins and olives.

The livestock is large and breeding of sheep, goats and poultry is widespread. As sales products, milk and meat count less than wool, hides and skins. Long-haired mohair roll from angorage goat is an important export item.

15.4 of the country’s area is covered by forest (2016). Forestry has a relatively limited economic significance. Much of the mountain forest has so far been untapped due to lack of transport opportunities.

In 2017, deep sea fishing amounted to 320 280 tonnes, while freshwater fishing was 31 400 tonnes. Deep sea fishing is based on taking advantage of the fish migrations from the Black Sea to the Mediterranean. The fish farming industry doubled in the period from 2005 to 2017, when production was 273,400 tonnes. 40 percent of this production was trout. Turkey is one of the largest fish farming nations in the Mediterranean.

The industry contributes 32.9 percent of GDP and employs 27.0 percent of the working population (2019).

The most widespread industry is the textile industry, which is also the most important export industry. In addition, the production of electronic products is a significant industrial and export sector. Turkey is the world’s 15th largest manufacturer of motor vehicles. There is also significant production of iron and steel, industrial chemicals and refined petroleum. Turkey has several shipyards, which build ships, ferries and fishing vessels for the domestic market and for export. Other important industrial sectors are the cement, glass and ceramic and paper industries. The most important industrial areas are located in the west, around Istanbul, Bursa and Izmir.

The consumption of primary energy in 2016 was 5.7 exa joule (EJ). 77 percent of consumption is based on imports. Per capita consumption was 73.3 gigajoules (GJ), which is slightly below the average consumption in the world (77.5 GJ).

The country has a few energy reserves of its own, in the form of crude oil, natural gas and coal, but annual production is close to consumption. In 2018, the remaining oil reserves were estimated at 341.6 million barrels. Annual production is around 2.5 million tonnes (105 PJ). The gas reserves are estimated at 6.2 billion cubic meters, with an output in 2016 of 367 million cubic meters (13 PJ).

In 2017, the production of electrical energy was 283 terawatt hours (TWh), which is an increase of over 40 per cent over the last ten years. Net electricity consumption per capita is around 2 700 kilowatt hours (kWh).

Of the produced power, 36.8 percent comes from gas power plants and 32.5 percent from coal power plants. Hydropower is 20.2 percent and together with wind power (6.3 per cent), solar power (1 percent) and geothermal power (1.8 percent), the total share of electricity based on renewable energy is 30.1 percent. Turkey has no nuclear power plants in operation, but work on the first nuclear reactor at the new Akkuyu power plant is underway and is expected to be completed in 2023. Three more reactors will be built at this power plant, which is expected to be fully operational by 2025.

Turkey has invested heavily in the development of the tourism sector and, over the last decades, has seen a steady increase in visitors from abroad. In 2018, 39.5 million tourists visited Turkey, compared to 32.4 million in 2017. The coastal areas of the Black Sea, the Aegean and the Mediterranean have good opportunities for boat and bath tourism. It is also a significant health tourism to the country’s many hot springs. Turkey is rich in cultural monuments from prehistoric times (see Asia Minor) from Greek and Roman antiquity, from early Christian and Byzantine times as well as from the Islamic period (Ottoman Empire). In total, 18 places in the country are listed UNESCO World Heritage List, see external link.

Turkey has been an important link between Europe and the Levant from the earliest times. Under Mustafa Kemal Atatürk, who was president from 1922 to 1938, major investments were made in the development of the railways. The development included a new network that radiated from the new capital Ankara to the three coasts and the easternmost provinces. The country’s total rail network amounts to 12,710 kilometers (2018). The main port cities are Istanbul and Izmir, Samsun, Mersin, Iskenderun and Trabzon. The major international airports are located at Istanbul (İstanbul Havalimanı), Ankara (Esenboğa) and Izmir/ Trabzon (Adnan Menderes).