According to abbreviationfinder, SR is the 2 letter abbreviation for the country of Suriname.

Economic policy has tended to be so expansionist that it has led to large deficits in the state budget and balance of payments and high inflation (23.8% in 2003). A more restrictive and liberalizing policy was attempted from 1993, but it had to be partially abandoned after a while.

In 2004, agriculture (including forestry and fishing) contributed 6.9% of GDP and employed 8% of the working population. Only 0.5% of the land area is cultivated, mainly in the coastal areas in the north. The inner parts are difficult to access both for settlement and communications. The majority of the area is used for rice cultivation. Rice is the country’s most important agricultural product and today contributes with approx. 10% of export revenue. Otherwise, various types of citrus fruits, bananas, vegetables, sugar cane, corn coconuts, manioc and other are grown in 2004, after two years of exports of bananas resumed. Some livestock are kept: cattle, sheep and goats, pigs and poultry. 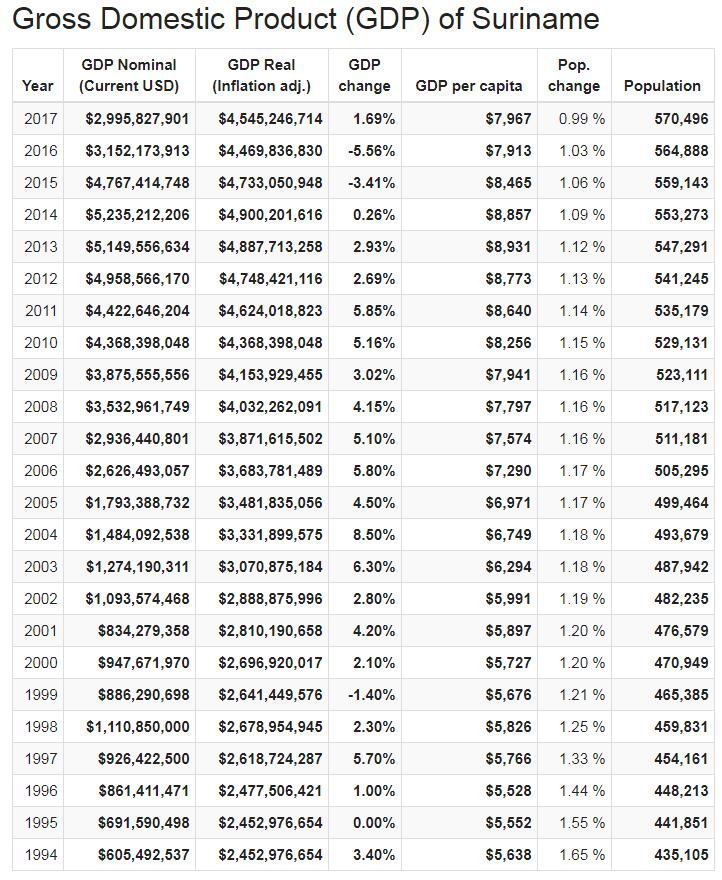 According to countryaah, over 80% of the land is covered by forests, but the forest is difficult to access and is not usable. Almost all felling is processed, such as wood pulp, building timber or veneer sheets.

Shrimp fishing is important, and shrimp exports currently amount to approx. 10% of the country’s export value.

Bauxite is the country’s most important mineral, and is mainly mined in the Marowijne district in the east. Production was 4.2 million tonnes in 2003, and is controlled by American and Dutch companies. Iron ore, manganese and copper are also extracted, and there are unexplained deposits of platinum and kaolin. In the country’s central, eastern parts there are large deposits of gold. In Saramacca and Tambaredjo, both west of Paramaribo, oil discoveries have been made. Crude oil production has risen sharply over the past decade. Almost half goes to exports, most of which goes to the country’s aluminum industry. Suriname has great potential for hydropower.

Beyond the aluminum industry, which utilizes the country’s deposits of bauxite, the industry is relatively poorly developed. Most of the rest of the industry has an emphasis on the food and beverage industry (juice, margarine, frozen shrimp, tobacco, etc.), the clothing industry (footwear) and sawmill. The industrial sector today contributes 23.7% of GDP and employs 11% of the working population.

The service sector contributes 55% of GDP and 64% of employment.

Just over half of the export value is alumina and aluminum. Otherwise export of gold, shrimp and fish. The largest recipient of the country’s exports is the US with 23% of the export value, Norway (19%) and the Netherlands (11%). Imports consist of crude oil, machinery and transport equipment, industrial finished goods and foodstuffs. Important countries of import are the United States (35%), the Netherlands (15%) and Trinidad and Tobago (12%).

The country’s road network mainly comprises coastal areas, and no main roads are built for the inner areas of the country. Therefore, navigable rivers and canals are important for the country’s transport and communication. Paramaribo is the largest and most important port city; International Airport (Johan Adolf Pengel, formerly Zanderij) 45 km from Paramaribo.