According to abbreviationfinder, SK is the 2 letter abbreviation for the country of Slovakia.

Slovakia has an open economy that is largely driven by the export of cars and electronic equipment.

Slovakia as part of Czechoslovakia

Until 1948, much of the Slovakian part of Czechoslovakia was characterized by agriculture, although there were also a number of small and medium-sized industrial enterprises in the cities. In the following decades, the communist regime carried out a large-scale industrialization of the country. Some unilateral commodity production was placed in the Slovakian part, while the Czech territories retained most of the processing of finished products. This lack of equilibrium between the two state republics was one of the main contributing causes of Czechoslovakia being split into two independent countries in 1993. 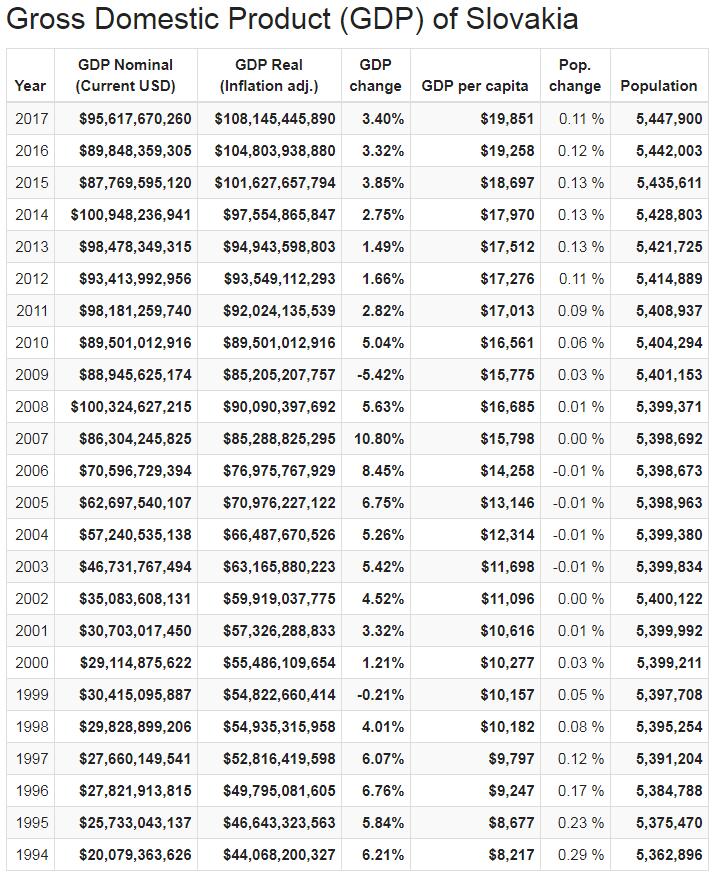 Slovakia as an independent state

As a new independent state, Slovakia had a difficult starting point. During the periods under Prime Minister Vladimír Mečiar (1993-1994 and 1994-1998), the country did achieve considerable economic growth, but the Mečiar government’s transition to a market economy was half-hearted and little future- oriented. Companies were often privatized by ignorant and corrupt buyers who either failed to manage them or who resold them cheaply, often to foreign owners. At the same time, serious foreign companies were hesitant to invest in Slovakia, since the political situation in the country was considered unstable.

The right-wing government of Mikuláš Dzurinda, who came to power in 1998, initiated reforms towards a more liberal market economy. Conditions became more transparent, which made the country more attractive to foreign investors. Former state-owned companies, particularly banks and companies in the energy sector, also came into foreign hands quite quickly. This led to the country experiencing more dynamic economic growth, but at the same time increased the gap between poor and rich, and the social situation deteriorated for relatively large sections of the population. The unemployment rate rose to 19.79 percent in January 2001. Since 2013, unemployment has been steadily declining; from just over 14 percent to 5.7 percent in 2018.

Already in 2000, foreign investment in Slovak business was greater than in the previous seven years combined. Gross domestic product (GDP) increased by 1.2 percent annually in the period 1990–2003. In 2003, the increase was 4.5 per cent. Together with nine other countries, Slovakia joined the EU on 1 May 2004. Since then and until 2018, the country’s overall economic growth has been about 60 per cent. GDP per capita is about 80 percent of the average in EU countries (2018).

Collectivized agriculture was one of the few business areas that worked reasonably well under the Communist regime in Slovakia. Therefore, first there was no great enthusiasm for the privatization policy that started in 1990 and was implemented in a short time.

The agricultural area covers 49.7 percent of Slovakia. Agriculture and forestry’s contribution to GDP is 3.8 per cent and 3.9 percent of the working population is employed in these primary industries (2017). According to Eurostat statistics, there were 24,460 farms in 2010. The average size of farms was 77.5 hectares in 2010 compared to 50.2 hectares in 2000.

In the fertile plains of the southwest and southeast, wheat and other cereals, maize, sunflower and tobacco are grown. On hills over most of southern Slovakia there are vineyards. Potatoes, oats and flax are mainly grown in the fields in the mountainous areas. Fruits and vegetables are grown largely throughout the country.

Cattle and pigs are the most important of livestock. In the mountains of central and northern Slovakia, there are long traditions of sheep farming that not only provide wool and meat, but also milk for the production of some special Slovak sheep cheeses. Poultry farming is also important. There is also hunting, especially on small game and bird.

40.2 percent of the country’s area is covered by forest. The state owns 41 percent of the forests. In 2017, 8,995,000 cubic meters of timber were produced, which was mainly used for industrial purposes. The paper industry is relatively large compared to several other countries in Central Europe. About a million tonnes of paper is produced annually, most of which is exported.

Catching fish in rivers and canals, as well as in natural and artificial lakes has long traditions in Slovakia. In the communist era, however, many rivers were heavily polluted, leading to a reduction in fish stocks. After the upheaval in 1989, the situation has gradually improved. In several lakes, fish farming is mainly driven by trout and carp. Production amounts to well over 1000 tonnes per year. The fishing industry’s overall contribution to the country’s GDP is negligible (0.002 percent).

Slovakia’s lignite and lignite mines are mainly concentrated around Prievidza in the central part of the country and in Vel’ký Krtíš. In the mountains further east, metal ore is extracted, especially iron, zinc, copper, lead, magnesite, uranium and mercury. At Gbely in the west, there are deposits of crude oil and natural gas, which, however, cover only a modest part of the country’s overall needs. The construction industry has important resources in the domestic extraction of, among other things, limestone, gravel and brick clay.

In 2016, 57.6 percent of the country’s power generation came from the four nuclear plants in Bohunice and Mochovce. Hydroelectric and coal power plants accounted for 16.2 and 11.8 percent respectively. When it comes to raw materials for energy production, Slovakia is heavily dependent on foreign countries. This is particularly true of imports of crude oil and gas from Russia.

The industry, including the construction industry, the energy sector and mining, contributed 35 percent of GDP in 2017, as industrial production increased by 2.2 percent compared to 2016. In 2017, 22.7 percent of the working population was employed in the industry. Following Slovakia’s accession to the EU in 2004, the country’s industrial sector has grown strongly. Measured according to the total income of the individual industrial sectors, the five most important sectors are as follows: engineering 28 percent, power industry 18 percent, chemical industry 13 percent, mining industry 9 percent and the food industry 9 percent.

Slovakia is Europe’s seventh largest manufacturer of motor vehicles and the world’s largest manufacturer of motor vehicles, calculated by number of inhabitants. In 2017, a total of 1,040,000 cars were produced. About 200,000 people are employed directly or indirectly in car production, which accounts for 43 percent of the country’s total industrial production. Below is an overview of the car percentages established in Slovakia, where they have production and when production started.

The Slovnaft oil refinery in Bratislava refines between 5.5 and 6 million tonnes of crude oil annually. The US Steel iron plant in Košice is the largest integrated steel producer in Central Europe. In Žiar nad Hronom is the large aluminum plant Slovalco (formerly ZNSP), where Hydro holds 55.3 percent of the share capital.

Slovakia also produces train carriages, ships, refrigerators and freezers and radios. The timber, paper and textile industries are important, and the chemical industry produces rubber, plastics, fertilizers, building materials, cosmetics and pharmaceuticals. The clothing and footwear industry also has long traditions. The food industry includes, among other things, sugar refineries, which process the country’s own sugar beet. Slovakia also has mills, dairies, as well as the production of mineral water, spirits, wine and beer. Several Slovak beers have also made their mark internationally.

There are significant opportunities for both summer and winter tourism in Slovakia. The Slovak mountains, not least the Tatra and Fatra mountains, have excellent skiing terrain. Summer tourists find many marked trails of varying nature. Slovak rivers, lakes and some artificial ponds are used for swimming and other water sports. Bratislava, Košice and a number of other cities offer valuable historical architecture, museums and other cultural attractions. The country has many castles and castles from the Middle Ages and from later periods. Slovakia also has several attractive spas with natural thermal water used by patients and other bathers. The main spas are Piešt’any, Trenčian Teplice, Sliač, Bojnice and Bardejov.

Especially after the country was independently invested by the authorities in the tourism industry, but initially there were problems with poorly developed service sector and poor marketing. The influx of foreign tourists has increased since the latter part of the 1990s. This trend has continued following the country’s membership in the EU in 2004. The number of tourists increased from 3.5 million in 2006 to 5.5 million in 2018. Direct and indirect employment of this industry in 2016 was about 150,000 people. This number is expected to increase to around 160,000 by 2027.

Since Slovakia joined the EU and part of the EEA in 2004, the country’s economy has become very open and foreign trade increasingly important for economic growth.

In 2017, total exports totaled US $ 80.8 billion, while imports totaled US $ 80.7 billion. With that, Slovakia had a trade balance surplus of US $ 100 million. The three main export products are motor vehicles, electrical machinery/ equipment and electronic equipment, including computers. The three main import products are motor vehicle parts, crude oil and gas.

Slovakia’s railway network is 3626 kilometers. The total road network is 56 926 kilometers, of which 464 kilometers are highways. The country has 35 airports, two of which are larger international airports (Bratislava and Kočice) and six are smaller international airports (Piešťany, Sliač, Žilina, Poprad-Tatry, Prievidza, Nitra and Janíkovce). The Danube and some channels are used for both passenger and cargo traffic, primarily for international connections. The length of navigable waterways in Slovakia is 172 kilometers, of which 38 kilometers canals. Given the country’s central location on the European continent, Slovakia is an important transit country.

According to abbreviationfinder, LV is the 2 letter abbreviation for the country of Latvia. Latvia’s economy is part of the EU’s economic community, and the country also has strong ties with Russia and the other former Soviet states. Exports make up more than half of gross domestic product. Forestry and agriculture, alongside the production of […]

The song and the air. – The musical hegemony passes to Flanders, where the Flemish composers, who are influenced, among others, by the influence of the Chapel of the King of France and that of Burgundy, compose almost all their profane songs on French words. The French Antoine de Févin of Orléans, Carpentras, Gascogne, Moulu […]

According to abbreviationfinder, AL is the 2 letter abbreviation for the country of Albania. 1992-97 According to Countryaah, in May 1991, 300,000 launched a strike demanding the resignation of the Communist government and a 50% increase in wages. Prime Minister Fatos Nano dissolved the government for seeking an alliance with the opposition parties, sparking fierce […]