According to abbreviationfinder, RW is the 2 letter abbreviation for the country of Rwanda.

Rwanda is a traditional agricultural community, with over 90% of the population engaged in agriculture and cattle farming. The country has few mineral resources, and agricultural products account for the majority of the country’s exports. Rwanda’s geographical location far from the sea, with subsequent costly goods transport, has been a negative factor in the country’s economic development. Furthermore, the war and genocide of the 1990s led to the demolition of Rwanda’s social and economic infrastructure, and all normal economic life stopped for an extended period, including most of organized agriculture and virtually all industrial activity. At the same time, the entire administrative apparatus disintegrated and the financial system stopped, while fugitive government forces robbed and destroyed much on their way to Congo. A large proportion of the country’s educated elite were either killed or fled. A large part of the cattle, which mainly belonged to the Tutsis, were slaughtered; At the same time, many Tutsi migrants returned from neighboring countries with their cattle.

After the war, the new government, with foreign aid, launched a rehabilitation and reconciliation program. It inherited a foreign debt of approx. $ 1 billion, including worked to fund the military spending of the allocated regime. The international community has made significant contributions to the reconstruction of Rwanda, and the economic development of the late 1990s was positive. At the beginning of 2000, the government presented a 20-year development plan with the goal of increasing GNI per capita from $ 250 to $ 5,000 by 2020. 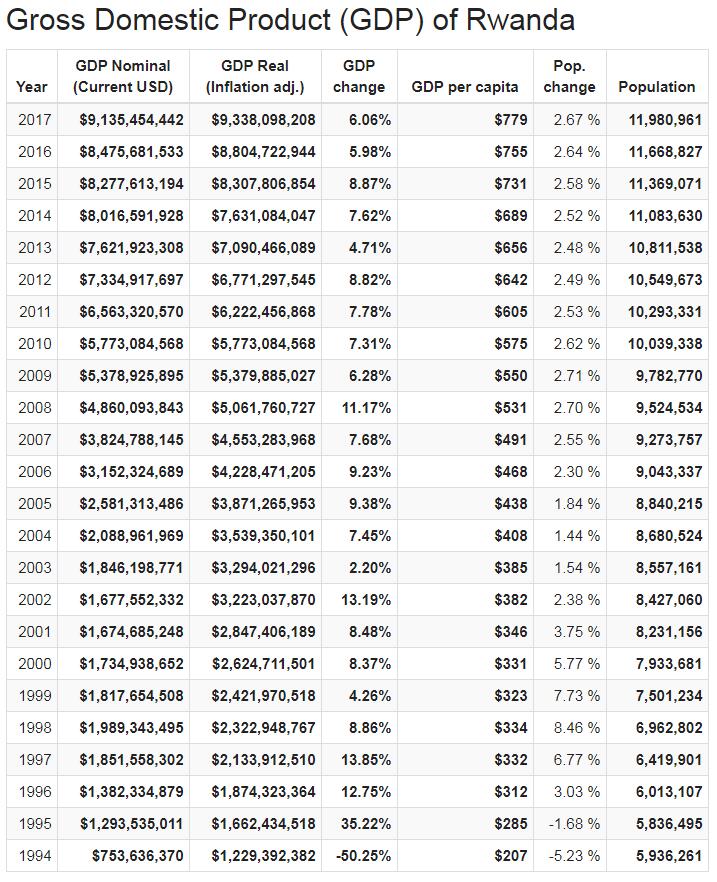 Rwanda’s economy is dominated by the agricultural sector, which employs over 90% of the population and traditionally provides the largest share of the gross domestic product: normally approx. 50%, but somewhat lower after the war. The sector also accounts for up to 60% of the export value. Of the total land area, 40% is cultivated land, 18% is pasture and 10% is forest. Almost all production is for self-storage, with little room for production of higher value goods, for export.

Rwanda is well suited for agriculture, but high population density has led to it being extensively operated, with hard pressure on available soil and little use of mineral fertilizers and limited access to water – and with declining yield per unit area as a result. The most important food crops are cooking bananas, then sweet potatoes, cassava, potatoes, sorghum, rice, maize and beans. Until 2000, coffee’s main agricultural product in terms of value of GDP and export value (up to 80% of total exports revenue); then tea became the main export product. The income from both coffee and tea has varied greatly, both because of. crop size and world market prices. Long-horned cattle have traditionally played an important role in Rwandan livestock farming, but underwent a crisis following the genocide, when much of the cattle was also slaughtered.

Forestry is operated only on a smaller scale and almost all harvesting goes directly to fuel.

Fishing and catching is on a small scale, either in Lake Kivu or in the rivers, but the catch has been rising, thanks to increased fishing efforts. Hunting is especially important for the two people.

Rwanda has few mineral resources, and mining has relatively little significance in the country’s economy. Cashew rides (tin) and some tungsten are extracted and exported. There are also minor deposits of beryll, colombo-tantalite, gold and sapphires. In the second half of the 1990s, Rwanda’s mineral exports, including diamonds, increased and were not recovered in the country. In 2001, a panel of experts set up by the UN recommended a boycott of Rwandan minerals, accusing the country of illegally exploiting the mineral deposits in neighboring Congo, under cover of its military presence there.

The energy supply is based on hydroelectric power. Rwanda imports about half of its electricity consumption, but at the same time has considerable potential for development – with production also for export. Natural gas deposits have been found below Lake Kivu at the border with Congo (formerly Zaïre), estimated at approx. 60 000 million m 3, half of which belong to Rwanda. Limited recovery took place in the 1990s, but the local market is too small for a larger commercial exploitation of the resource. Plans for the establishment of gas power plants, in collaboration with Burundi and Congo, were presented in 2003.

The industry is underdeveloped and consists mainly of processing of agricultural products and other food production. The industry, including two textile factories, a cement factory and other small businesses, stopped practically entirely as a result of the war and a lack of investment for subsequent reconstruction.

The road network of approx. 12,000 km is relatively dense and of good standard, with main road connections to Burundi, Congo, Tanzania and Uganda – and from there to Kenya. About. 80% of Rwanda’s foreign trade goes through Uganda and Kenya, substantially to the port of Mombasa. Rwanda does not have a railway, but a possible development, linked to Burundi, Tanzania and Uganda, has been discussed. Some shipping takes place on Lake Kivus. Kigali International Airport.