According to abbreviationfinder, OM is the 2 letter abbreviation for the country of Oman.

Oman is located on the Arabian Peninsula, adjacent to the Gulf of Persia as well as the Red Sea. Oman, like other countries in the region, has used oil and gas deposits to develop the country, but – compared to other Gulf states – has very small reserves. The coast, with strategically located ports, has traditionally made trade an important trade route, but has become less important over the years. Despite oil revenues, Oman is primarily an agricultural country.

Geographically, Oman is both a coastal state and a desert country. Although a very small part of the country (0.1 per cent of the area) is cultivable, agriculture, including animal husbandry, has traditionally been the dominant economic sector. On the coast, fishing has been important, and it is still in smaller coastal communities. 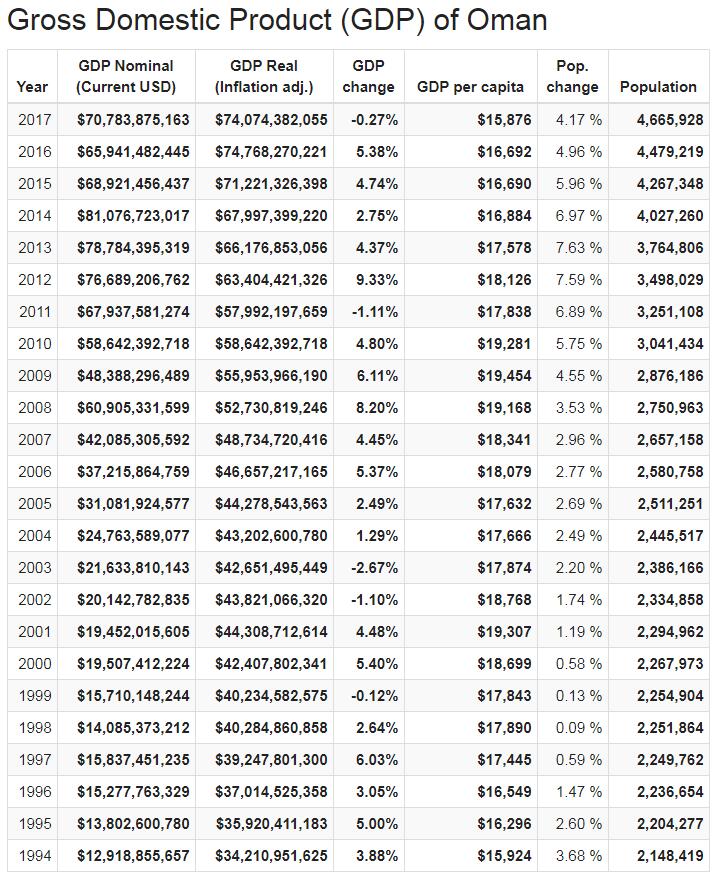 From the late 1970s, Oman has implemented a program for modernizing society, including a differentiation of business, including industrialization and privatization. This has been possible both thanks to the change of head of state in 1970, when Qaboos bin Said took over as sultan, and the revenue from oil extraction. These have been used to develop infrastructure and to invest in other businesses to create new business avenues. Among other things, the government has encouraged efforts to control the development of tourism.

A major concern is providing jobs for Omani citizens; so-called reorganization. Like other Gulf countries, Oman has opened to a large number of private sector guest workers, which the authorities want to replace with Omanans as far as possible, also as a result of significant population growth.

During periods from the mid-1960s, economic growth in Oman was higher than most other countries. However, Oman does not belong to the most oil-rich Gulf states, and the deposits are already largely exploited. This, and lower oil prices over time, have led to falling export revenues, lower growth, and higher debt.

Commercial oil was first detected in 1964, and the first oil export occurred in 1967. Thereafter, the oil sector dominated the country’s economy, and continues to do so. Revenue from the petroleum sector accounts for about three-quarters of export revenue, and around two-fifths of gross domestic product.

In the 2000s, Chinese investors have invested in several sectors in Oman.

Oman is not very suitable for farming, but there is a considerable animal husbandry and extensive fishing. Just under ten percent of the working population of the population is employed in agriculture. Oman is not self-sufficient in food, and agriculture is dependent on artificial irrigation. Reducing food imports is a political priority, also through increased investment in fisheries.

The most important agricultural areas are located in the Zufarr area in the southwest, and on the al-Batinah plain along the coast to the north. The main crops consist of fruits and vegetables, especially melons, citrus fruits and wheat. Tomatoes, alfalfa, mangoes, melons, cabbage, bananas and tobacco are also grown. In the oases mainly dates are grown, and in addition, extensive farming of camels. Oman is a leading producer of meat in the Arabian Peninsula.

Since the 1980s there has been a gradual expansion of the fisheries, including with processing for export. Fishing is mainly conducted as coastal fishing with smaller boats.

The first oil extraction licenses were granted as early as 1937, but deposits were first discovered in 1964, at Fahud, and commercial extraction and export of crude oil began in 1967. Oman does not have large reserves of crude oil, and the deposits are scattered in a number of smaller fields, both onshore and offshore; the main fields are southwest of Muscat and in Zufar (farthest southwest).

Oil and natural gas exports account for about 70 percent of Oman’s total export revenues. In 2017, oil exports were around 800,000 barrels per day. There are pipelines from the production fields to the shipping port of Mina al-Fahal outside Muscat. In the late 1990s, a pipeline for export of gas to India, under the Indian Ocean, was investigated, but the project supported technical difficulties.

Oman has deposits of several minerals, some of which are mined. Commercial extraction is concentrated to copper, chromium and limestone. Copper deposits are found mainly in the Suhar area on the coast of al-Batinah, and copper has been processed since 1983 at the state-owned Suhar plant. In the same year, chromium production began, including in Suhar. Kalstein used in cement production is extracted both north and south of the country. Occurrences have been found including asbestos, lead, dolomite, plaster, gold, iron ore, cobalt, coal, manganese, nickel, silicon, zinc and silver.

Power is primarily produced from own petroleum sources. Work is underway on the development of large solar power plants in the south of the country.

Since the mid-1970s, Oman has used export revenues from the petroleum sector to develop a modern industrial sector. Foreign interests have also invested in the country. Before the oil age, the industry was little developed and traditionally consisted essentially of crafts.

Oman has a significant cement and building industry, which together with petroleum refining are the most important industries. The first oil refinery was completed at Mina al-Fahal in 1982; another is listed by Suhar. Petrochemical industry has also been established and aluminum and mineral fertilizers are produced. A number of desalination plants have been established to remedy the water situation. Otherwise, household items and food are produced.

According to Countryaah, Oman’s main export products are oil and gas; then metals and metal products, as well as smaller quantities of agricultural products, dominated by dates, fish, citrus fruits and live animals, as well as some textiles. The country imports a variety of goods, including machinery and transport equipment, industrial goods and food. The main trading partners are (2017) China, the United Arab Emirates, South Korea and Saudi Arabia. Over 43 percent of exports went to China. About a third of imports came from the United Arab Emirates; well a quarter from the United States.

Oman’s trade with Norway is modest, but imports in 2017 were high, when the country bought Norwegian defense equipment (rockets).

The development of the transport network has largely taken place since 1970. All major population concentrations are connected with roads except for some mountain villages. There are no railways in Oman, but several airports and strips. International airports can be found at Muscat and Salalah.

With its strategic location and tradition of shipping and trade, Oman has focused on port development. The most important are Port Sultan Qaboos, which includes a container port, and Mina Raysut; both are near Salalah. Mina al-Fahal is an important petroleum port. At Matrah there is a deep water port. Oman has launched a program to modernize the port infrastructure. It is designed to facilitate the export of petroleum and industrial products, and to diversify the economy, including tourism facilitation. Oman also aims to make better use of its strategic coastal position, and to establish a hub for international trade. Investments in an economic free zone in Duqm should contribute to this.

Chinese investors have been involved in the development of transport in Oman, with plans for development of roads, water and power grids, as well as in industrial and energy production.