According to abbreviationfinder, NZ is the 2 letter abbreviation for the country of New Zealand.

New Zealand’s isolated location and modest home market have periodically created financial problems. The business sector is mainly based on smaller industrial enterprises and the service industries. In the second half of the 1980s, a liberal market economy policy was introduced, in which much of the political control of business development was abolished, and in 2005, New Zealand ranked at the top of the World Bank’s ranking list, in the “business-friendly economy” class, ahead of Singapore, USA, Canada and Norway. 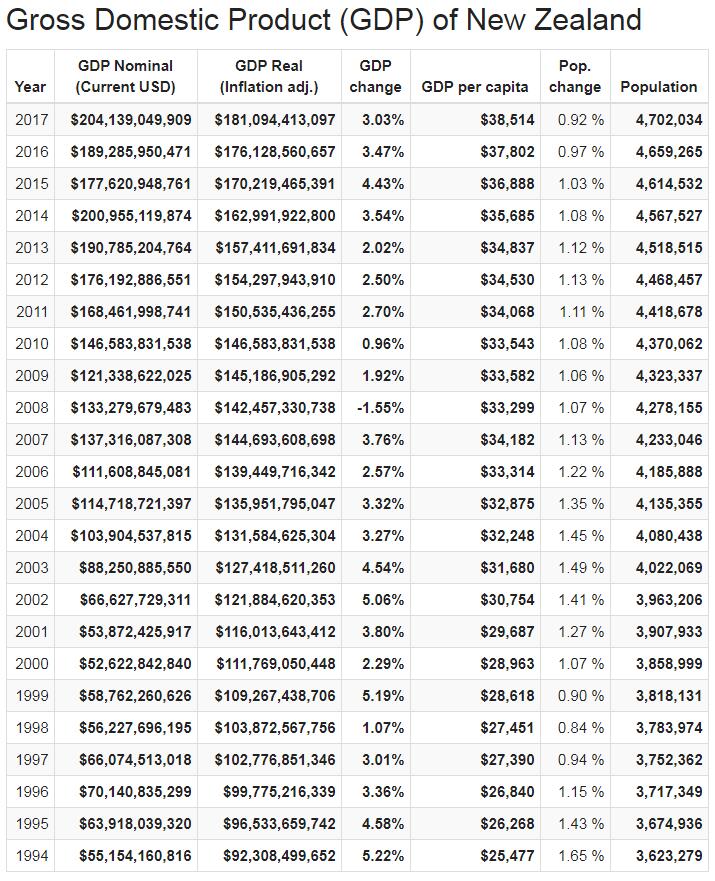 Although agriculture comprises a relatively small share of GDP (below 10%), agriculture is still very important for the country’s economy. Agricultural products comprise a large proportion of the export value, while much of industrial production is based on the processing of agricultural products. Over 90% of lamb meat, about 80% of the beef, and about 3/4 of sheep meat exported. New Zealand alone accounts for 40% of world trade in sheep and lamb meat and around 30% of world wool production. The most important export products of economic value are dairy products such as cheese, milk powder, butter and milk.

After all agricultural subsidies were removed in the 1980s, there has been a widening of production. The number of sheep has been declining, while deer and goats have been new focus areas. The most important agricultural crops are wheat, barley and peas, which are mainly grown on the Canterbury plain in Christchurch. Fruit is an important export product and is grown at Nelson furthest north on the South Island and at Napier and Auckland on the North Island. New Zealand produces approx. 1/4 of the world’s kiwis; otherwise apples and pears are grown. The country is also a significant exporter of wine.

Agriculture is scientifically and efficiently run, and the farms are large and specialized. In total, half of the country’s land is used as grazing land.

The country’s 200 mile economic zone is the world’s fourth largest, and has an area of ​​approx. 13 times larger than the land area. The zone mainly includes nutrient-poor deep-water areas, and therefore the marine catches are relatively small in relation to the size of the area. However, marine species are an important export product since 90% of the catch value is exported. Aquaculture with mussel, salmon and oyster farming comprises a significant part of the production value.

There are strong restrictions on foreign participation in the country’s fishing. Over half of the commercial fishing quotas are controlled by the indigenous people of Maori.

About 30% of the total area is covered by forest. Of this, around 1/5 planted. New Zealand has a climate suitable for the operation of forest plantations which are mainly located on the North Island. Almost all harvesting takes place in the newly planted forest.

Natural gas is extracted at several fields in the Taranaki region. The largest of them, the Maui field on the continental shelf, is expected to run empty in 2006. A new larger production area near New Plymouth is expected to become operational in 2006. Natural gas is used both for fuel production for cars and in gas power plants. The country has large coal reserves, but most of it is of low quality. The most valuable deposits of coal are found on the west coast of the South Island. The oil reserves are relatively small and 80% of consumption must be imported.

Otherwise, iron sand and smaller quantities of gold, as well as limestone and sand, are used for the building industry. Along large parts of the west coast, the sand contains titanium magnetite or ilmenite, from 1968 utilized at the Glenbrook steel mill.

In 2017, the generation of electrical energy was 42 TWh. New Zealand’s power generation is based on a high proportion of renewable energy, which in 2017 accounted for 82 per cent, distributed on hydropower, 59 percent, geothermal energy, 17 percent and wind power, 5 percent. Gas power and coal power accounted for 15 and 3 percent respectively.

The industry primarily includes companies that process agricultural products, factories that produce various consumer products for the domestic market, car repair shops, larger sawmills, cellulose and paper mills. A small domestic market and competition from import goods are hampering industrial development. There is an oil refinery at Whangarei north of Auckland, a steel mill at Glenbrook south of Auckland, an aluminum plant at Bluff furthest south, a larger integrated cellulose and paper mill in Kinleith and an integrated sawmill and cellulose mill at Whirinaki near Napier. The industry also includes the production of a number of niche products where New Zealand has comparative advantages. These include the development of new technology in food technology and the production of products for outdoor activities such as climbing equipment, camping equipment and mountain bikes.

The tourism industry is an important contributor to the development of the country’s modern economy. New Zealand, with its clean and safe image, is an attractive tourist destination. Natural areas that include high mountains, glaciers, lakes, forests, fjord landscapes, volcanoes, hot springs and beaches are alluring to foreigners who spend an average of 21 days in the country. In the period 2000–2004, more than 2 million foreigners visited the country each year.

According to Countryaah, New Zealand’s foreign trade has been hit by EU import restrictions, and the UK’s share of its exports in particular has fallen. As the European market has subsided, New Zealand has focused on other markets, especially Australia, Japan and the United States. The most important export goods come from livestock farming. New Zealand is one of the world’s largest exporters of sheep meat, wool, butter and cheese. In addition, fruits and vegetables, fish, minerals, chemicals, wood products, metals and metal products are exported. Imports mainly include machinery and transport equipment, chemicals, petroleum and petroleum products.

New Zealand has a very high car density compared to the population. In Auckland, the traffic problems are so great that they hamper the economy. The country’s total road network is approx. 95 000 km. The total railway network is 3912 km (2001), of which 500 km is electrified. There are 13 major ports of which the most important are Auckland, Tauranga, Wellington, Lyttelton (Christchurch) and Port Chalmers (Dunedin). The islands are linked by ferry services between Wellington, Picton and Lyttelton.

More than 90% of foreign trade is by ship, but the country’s own trading fleet is relatively small. Much of the traffic between North and South Island is by air, and the airline network is well developed both at home and abroad. There are international airports in Wellington, Auckland and Christchurch.

Questions and Answers about the Crocodile