According to countryaah, Nepal is one of the least industrialized, least urbanized and poorest countries in the world. 75 percent of the working population are employed in agriculture.

The manufacturing industry is very small and mainly located to the Kathmandu valley as well as eastern and middle Tarai. Important sectors are the food industry (for example, sugar refining) and the textile industry. Industrial development is hampered by a very poorly developed infrastructure, modest domestic market, competition from India and the great distance to trade ports. The significant water energy resources are utilized to only a fraction.

Nepal’s economy is dependent on foreign aid, including from neighboring India. An increasingly important source of income is increasing tourism. 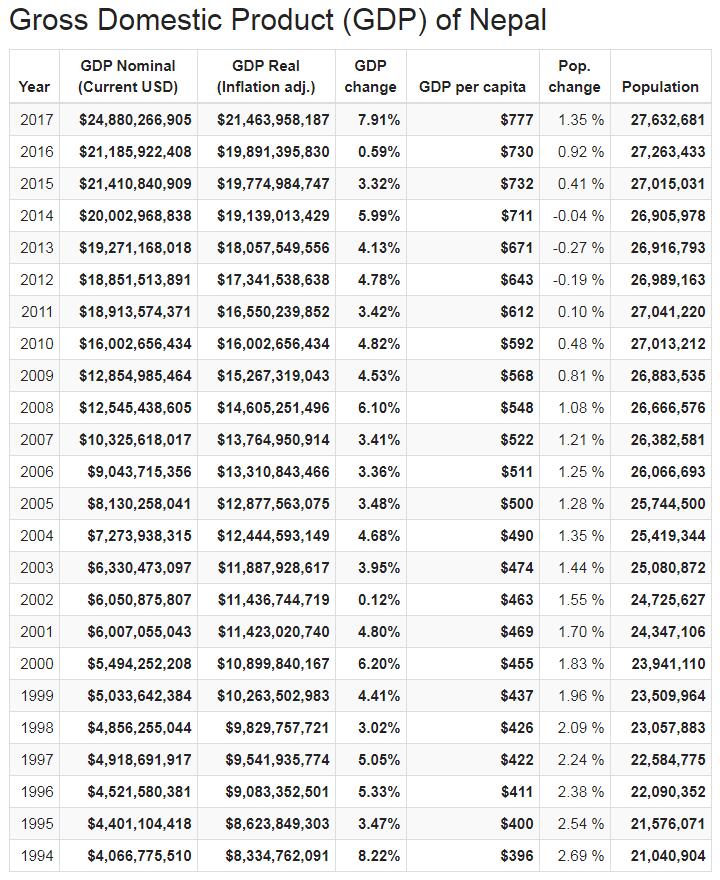 A large majority of Nepal’s population live as farmers in a rural area overcrowded, either in the valleys of the mountain areas or in the plain of Tarai. Despite several attempts at land reform in recent decades, land ownership is highly concentrated. Farmers’ livelihoods are usually burdened by lease fees and liabilities, which in combination with increased resource utilization, an unpredictable monsoon climate and the absence of transport systems keep productivity down.

The most important crop is rice, which is grown both on the southern plains and on terraces in the mountain areas. Other cereals of importance are maize, wheat and millet. The main forage crops, which are grown almost exclusively in the Tarai, are sugar cane, tobacco and jute.

A serious problem is the ever-increasing risk of severe soil erosion, floods and landslides on the mountain areas’ cultivation land, which is an effect of deforestation, high grazing pressure and terracing in increasingly steep areas.

The forest is of great importance to the Nepalese farmer. for grazing, for collecting wood, building materials, fruits and herbs and for hunting. The increased pressure on land resources has led to an over-utilization of the forest with serious ecological consequences, mainly a sharp increase in soil erosion. This could include total deforestation (in industrial felling or burning), heavy slurry (in intensive wood collection) or new, undesirable vegetation (for example, if too high grazing pressure).

The harvest for industry and export is very small compared to that for household needs.

Nepal has a negative trade balance, which is only partly offset by foreign aid and tourist income. The country is dependent on India, which is partly the dominant trading partner and partly controls Nepal’s communications by sea. Other important trading partners are China and the US.

The main export goods are carpets and clothing, as well as simpler products such as yarn, fabrics and leather. Import goods are mainly oil products, machinery, gold, transport equipment, chemicals and medicines.

The absolute biggest attraction is the Himalayan mountain range with its magnificent scenery. Highly visible from the capital Kathmandu lies Mount Everest, the world’s highest mountain. The city is the center for most hikers and climbers, but is also an important tourist destination in itself. Other places to visit are Buddha’s birthplace of Lumbini in southern Nepal and the seaside town of Pokhara at the foot of Annapurna mountain.

The food in Nepal has been greatly influenced by Indian cuisine. Traditional Nepali food is fairly uniform with a constantly recurring dish, dhal bhat tarkari. This soup or stew consists of lentils, rice and vegetables, which are only varied by seasoning. Beef is rare for religious reasons, instead water buffalo, chicken and goat are eaten on more festive occasions. For the most part, however, the diet is vegetarian. Ground draft (vegetable soup) or gurr (potato pancakes) is served with chiya (tea with milk, sugar and spices) or beer. Tea can in itself constitute a whole dish, tsampa, if mixed with flour and water or milk. Occasionally, tea with salted yeast butter is served in. Yogurt on buffalo milk (curd) is an important nutritional supplement; mixed with water it becomes a thirst quenching drink (lassi).