According to abbreviationfinder, ML is the 2 letter abbreviation for the country of Mali.

Mali’s southern parts, which are crossed by the Niger River, are the country’s most economically important. The economy is strongly agricultural-oriented, which is why developments in recent decades have been negatively affected by recurring dry periods, such as the Sahel drought 1968-74 and the dry period 1982-85. Per capita GDP fell by 0.5 percent per year from 1980 to 1985, while the late 1980s and early 1990s were characterized by strong fluctuations. Since 1995, GDP has grown steadily, with a record growth of 12.1 percent in 2001. The period 2005-10 was the average growth of 5 percent.

Since the beginning of the 1970s, the country has had a trade deficit. This has led to Mali being very indebted. In order to obtain loans from the International Monetary Fund and the World Bank, the country has been forced to undergo extensive restructuring programs aimed at reducing public spending and privatizing business. Due to debt amortization, the external debt has fallen sharply during the 00s. Mali has great labor migration to the Ivory Coast, among others. 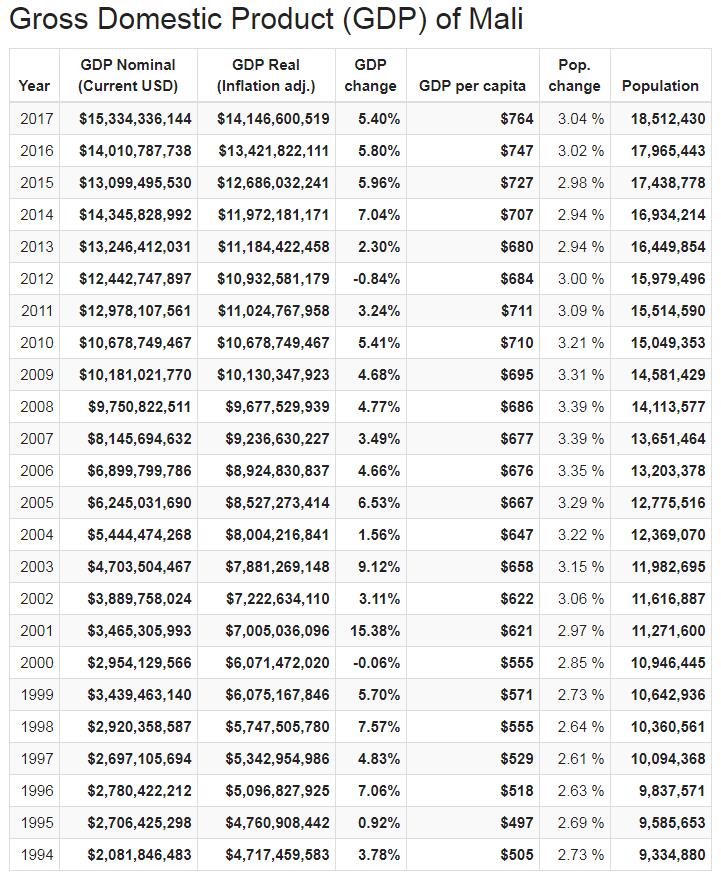 The agricultural sector is still the most important, although its importance has decreased over the last few decades. About 80 percent of the country’s workforce is employed in agriculture, the majority in self-sustaining agriculture. The sector is dominated by small-scale, relatively simple agriculture with a low degree of mechanization. Agriculture’s contribution to the economy has been negatively impacted by recurring dry periods, low producer prices and immigration from the country to the cities.

Mali is Africa’s third largest gold producer since the beginning of the 1990s and gold accounts for 80 percent of the country’s total export earnings. Gold is mined in the western and southern parts of the country. Findings of varying quality of bauxite, copper, iron, nickel and manganese have been made but not yet utilized. Exploration also occurs after oil and tungsten. In smaller quantities, diamonds, uranium, marble at Bafoulabé, phosphate at Gao and limestone at Kayes are extracted. Based on a long tradition, about 5,000 tonnes of salt per year are also extracted from salt mines in the northern part of the country.

80 percent of the country’s electricity generation comes from hydropower, mainly from the Selingué Power Plant in the Sankarani River and the Manantaliverket in the Senegal River. Wood and charcoal are still the most important source of energy for many households.

Mali has a small-scale manufacturing industry, which is largely focused on the processing of agricultural products and the production of simpler consumer goods. Industrial production is concentrated in the metropolitan area. In the mid-1980s, state-owned companies accounted for more than 75 percent of total turnover in the industrial sector. Inefficiency and high debt have led the country, under pressure from the International Monetary Fund, to undertake extensive privatizations.

According to Countryaah, Mali’s trade balance has traditionally shown a sharp deficit, but since gold exports took off from 2001, the country has for some years had a positive trade balance. The deficit is to some extent regulated in the balance of payments through aid funds, international loans and transfers from foreign-resident males. The most important export products are besides gold, cotton and live cattle. Imports are dominated by oil, machinery, food, industrial products, chemicals and transport. The most important trading partners are Senegal, Switzerland, China, the United Arab Republic, Burkina Faso and the Ivory Coast.

Mali is considered by many to be the most interesting tourist country in West Africa. However, its great potential for tourism is underutilized; the country had about 159,000 visitors in 2015. Most visitors come from France, the United States, Spain or West African neighboring countries.

The capital Bamako is beautifully located at Niger and has a large, tempting market with traditional handicrafts in textiles, leather and wood as well as characteristic West African jewelry. There is also a museum worth seeing. Mali has sub-Saharan Africa’s strangest urban and mosque architecture. It can be studied in the millennial Timbuktu, with mosques from the 1300s and a well-preserved building in sun-dried brick.

The city is on the edge of the Sahara by an old caravan road some mile north of the Niger River; the west of today’s trans-Saharan leads reaches into Gao, with two thousand-year-old mosques, up to the river. In Niger’s inland delta lies Mopti, surrounded by water, with a large fish market and a fine selection of Malian crafts. Perhaps the greatest experience is Djenné on an island in the delta. Neither Djenné’s suggestive cityscape nor the living habits of residents and market visitors seem to have changed much since the city was founded in the 11th century. Both Timbuktu and Djenné are listed on UNESCO’s World Heritage list.

Millet, sorghum, rice, maize and peanuts form the basis of the diet. Chili peppers, garlic and black pepper are common spices, and they flavor the pots cooked by meat (goat, sheep or beef) or fish from the Niger River. Chicken and chicken soup in combination is a common dish, as are pots cooked with crushed goat cheese. Stuffed pigeon appears as a festive dish, as does camel meat with potatoes and fried thighs. Risotto with only vegetarian ingredients is not uncommon; it becomes more popular with lamb or fish. Fully fried fish with peanut sauce and chicken with roasted peanuts complement the image of a kitchen that, after all, is dominated by the starchy porridge of the cereals mentioned above. Despite Islam’s wide spread, there is no alcohol ban; on the contrary, a good local beer is produced.