Luxembourg is a high-income country with solid economic growth, low inflation and unemployment and has one of the highest living standards in Western Europe. The country’s GDP per capita has been among the world’s highest for a number of years. In 2004, GDP per household was estimated at USD 58 900 per household, which was the highest in the world. Luxembourg’s economic prosperity is based in the iron and steel industry, which was established in the 19th century. The steel industry was particularly hard hit by the economic crisis of the mid-1970s when increased production costs and increased competition from other countries resulted in a number of closures. The industry has later become much more differentiated. manufacture of chemicals and rubber, and a new high-tech industry has been established. 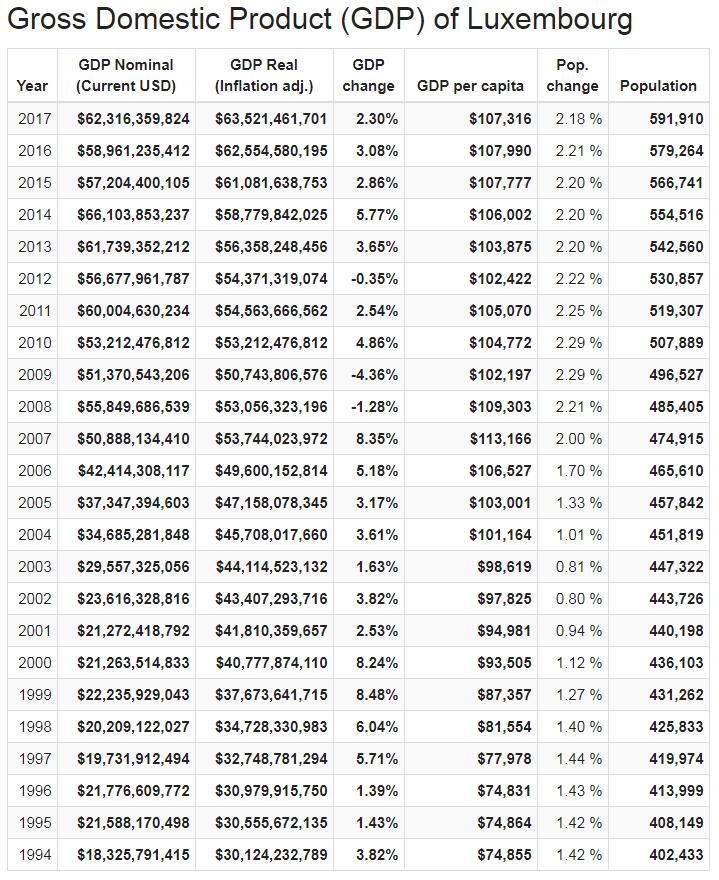 Growth in service industries, and especially the banking and finance sectors, has been significant and has compensated for the decline in the steel industry. Luxembourg is one of Europe’s most important financial centers, and in 2003 178 banks and 14 350 holding companies were established in the country. In addition, several international organizations have a seat here. In 2004, service industries contributed slightly more than 80% of GDP and 85% of employment.

Beautiful scenery and many medieval castles are attractions that draw tourists to the country. In 2004, Luxembourg was visited by approx. 925,000 tourists.

The agricultural sector (including forestry) has very little significance in terms of both. income and employment. Agriculture is based on small, family-owned units that are mechanically and efficiently operated. Luxembourg is self-sufficient with some agricultural products. The main products are cereals and potatoes besides grapes along the Moselle (Moselle wine). Animal husbandry and the production of dairy products are also important. Competition from other EU countries has put the country’s agricultural industry under pressure and helped change the production from the traditionally important grain and potato growing to more meat and dairy products.

Some grain and root crops are grown in the Ösling region in the north, and forestry plays a certain role. In the warmer and more fertile Gutland region of the south, grains, fodder crops, fruits, flax and hemp are grown.

The iron and steel industry was previously based on the country’s own iron ore deposits, an offshoot of the “minette ore” in the French part of Lorraine. Despite the cessation of the ore mining (1981), there is still steel industry based on imported ore, especially in Esch-sur-Alzette (Aciéries Réunies de Burbach-Esch-Dudelange, ARBED).

Of the other industry, the chemical industry and the manufacture of rubber and plastic products are the most important. Other manufacturing of metal products, machinery, paper and foodstuffs. A more high-tech-based industry, with the production of computer equipment and audio-visual equipment, is growing.

Steel and metal products, plastics and rubber products, machinery and agricultural products, especially wine are the main export goods. However, large revenue comes from export services. According to Countryaah, the country’s liberal tax and corporate laws have led to hundreds of foreign firms setting up nominal offices in the capital. Income from tourism also has a certain significance. Imports include minerals and metals, machinery, transport equipment and oil products. Belgium, Germany and France are the most important trading partners.

The transport network is well-developed. motorways linking Luxembourg to neighboring motorways. The river port Mertert by the canal Moselle and the freight terminal at Wasserbillig is of great importance to the iron and steel industry. Outside the capital Luxembourg is the country’s international airport.

Business and Economics According to countryaah, Liechtenstein has for a short time developed from a traditional agricultural society to an advanced industrial society. The standard of living has come in line with that in Switzerland. Agriculture, which accounts for just under 1 percent of employment, is traditionally dominated by livestock management with a focus on […]

The UK and Northern Ireland have undergone significant restructuring in the last fifty years. In the 1970s and 1980s, traditional industrial regions experienced an economic downturn, partly because large parts of the machinery and textile industries were closed down or redeployed as a result of competition from import goods. The traditional mining industry was greatly […]