According to abbreviationfinder, LY is the 2 letter abbreviation for the country of Libya.

Before oil was discovered in the 1950s, Libya was a poor desert country with agriculture as its main industry. The oil changed Libya, and during the opening year of the 2000s, the country had among the highest GDP per capita in Africa. The civil war in 2011 hit the country hard, and Libya is in a complicated reconstruction process. Before the civil war, oil accounted for about 90 percent of the country’s income, a proportion that is likely to increase as large parts of the economic activity outside the oil sector has ceased as a result of the unrest in the country. 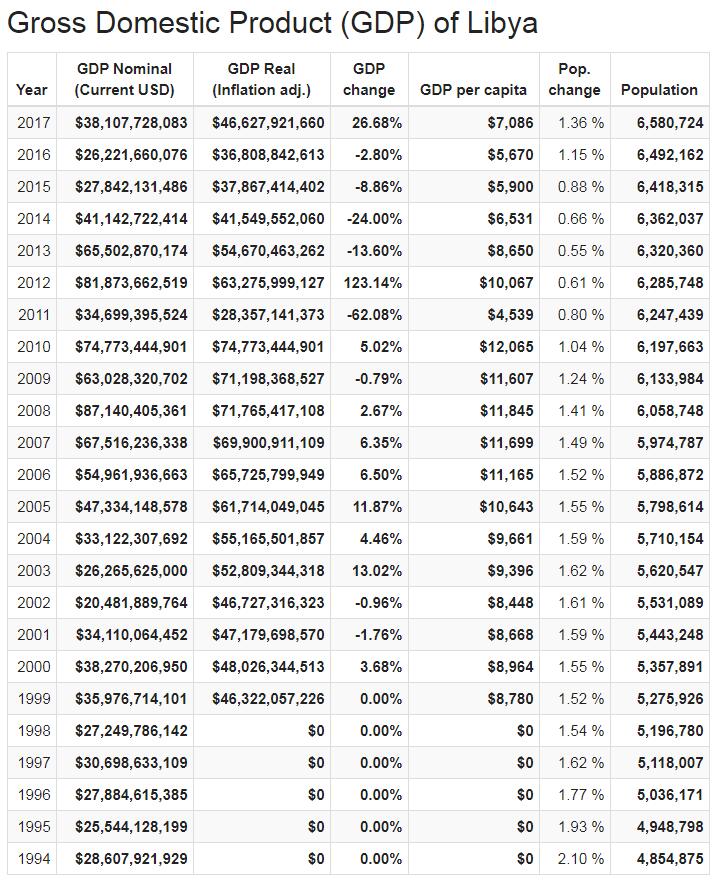 With al-Khadaffi’s Arab Socialist Revolution in 1969, planning economy and state ownership of production resources were introduced. By the mid-1980s, Libya was Africa’s second largest oil producer; oil accounted for 50 percent of GDP, but employed only 2 percent of the labor force. Oil revenues enabled broad development efforts, but foreign sanctions and fluctuating world market prices slowed the widening of the economic base during the 1980s. However, since the late 1980s, small-scale private business has again been allowed. In the early 1990s, the economy was further opened to private interests, and the government said it wanted to encourage tourism and foreign investment. This was made impossible in 1992 when UN sanctions against the country were tightened. Although the sanctions were eased in 1999 to be completely repealed in 2003, the country failed to attract foreign investment to the extent hoped for. In the early 2000s, Libya benefited from rising oil prices, but the civil war in 2011 and subsequent political chaos as well as falling world market prices for oil have significantly weakened its economy.

According to countryaah, the government of Libya still attaches great importance to agriculture. The goal is to achieve national self-sufficiency in food. Although 1/5 of public investment has gone to the agricultural sector since 1970, this target seems unreachable, and food imports, especially cereals, are significant. About 95 percent of the country’s area is desert and only 1 percent is cultivated. The rest consists of pastures. Precipitation dependent agriculture is possible only in a narrow coastal strip in the north; however, the precipitation amounts vary widely.

The most important crops in agriculture are olives, dates, almonds, fruits and vegetables. Major efforts have been made to expand oasis farming and increase irrigation. Over-use of groundwater in coastal areas has led to rapidly decreasing groundwater levels and saltwater infiltration from the Mediterranean. In 1983–2007, the state built a 2,800 km long network of pipelines to distribute groundwater from the Sahara to other parts of the country. The project was damaged during the civil war.

Libya is relatively low in minerals, but in addition to oil and natural gas, sulfur, salt, lime, plaster and iron are extracted. The first major oil discovery was made in 1957, and within ten years Libya had become the world’s fourth largest oil exporter. The proximity to the European market and the high quality (low sulfur content) of the oil contributed strongly to the rapid expansion of the oil industry.

Since 1970, Libya has been applying a voluntary restriction on production so as not to drain resources. The most important production areas are southeast of the Gulf of Syrten and at sea, where the Buri field, 120 km northwest of Tripoli (Tarabulus al-Gharb), is the Mediterranean’s largest offshore facility. A network of pipelines leads the oil to ports and refineries in as-Sidr, Ras Lanuf, Marsa al-Burayqa and az-Zuwaytina on the Gulf of Syrten, and to Tobruk in the northeast. Libya also has large deposits of natural gas.

Libya’s industry is poorly developed, but development has long been a top priority. Traditionally, operations are mainly based on the processing of agricultural products, but in recent years the petrochemical and building materials (cement) industries have increased in importance. In 2017, the industry contributed 52 percent of GDP (most of it from the oil industry) and employed about 30 percent of the country’s workforce. The civil war and the ensuing turmoil in the country have posed major problems for Libya’s industry, among other things, the large state steel mill in Misrata has had to stop production during periods.

Since 1961, when oil exports began, Libya has had a significant trade surplus. In 2010, oil accounted for 98 percent of the export value. Imports mainly comprise industrial products, machinery, transport and food, but in recent years the import of wood products and building materials has increased greatly. In 2017, the main exporting countries were Italy, Spain and France and the main importing countries were China, Turkey and Italy.

In 1981, the United States received 27 percent of Libya’s exports, but a trade embargo in 1982 put a stop to US imports of Libyan oil. Libya’s foreign trade has been further cropped when UN sanctions came into force in 1992, as a result of the US, Britain and France accusing Libya of supporting international terrorism. The sanctions were eased in 1999 and lifted in 2003.

Libya’s recent history can be divided into two phases: the period under Muammar al-Gaddafi as head of state, and the period after the regime change following the Libya war in 2011. Gaddafi seized power in a military coup in 1969, ruling Libya until 2011, when he was killed during a multinational military action, which followed an uprising during the Arab Spring. The Gaddafi period was characterized by internal political stability, but changing international relations. The time after 2011 has been marked by a state formation in disarray, with rival governments – backed by various foreign states.

While Gaddafi’s Libya was united as one state to a greater extent than ever in its history, political and regional contradictions have subsequently brought the country into a state of civil war, with a power struggle especially between groups in Tripoli in the west and Benghazi in the east, which partly reflects the historical divide between Tripolitania and Kyrenaika.

The regime change led militant Islamists, including the Islamic State (IS), to establish a foothold in Libya. When IS was defeated in Syria and Iraq in 2016–2018, Libya remained a strong base area. While Gaddafi became an advocate for African unity, the development in Libya after the regime change has contributed to destabilization in northern Africa and the Sahel region. During Gaddafi many Africans got work in Libya. The state dissolution has resulted in the country being used by human traffickers in traffic with illegal migrants to Europe.