According to abbreviationfinder, JO is the 2 letter abbreviation for the country of Jordan.

Jordan has a fairly small economy, which is largely supported by foreign aid. The country is extremely foreign dependent with few natural resources and poor conditions for agriculture. When the border with Israel was closed in 1948, relations with the ports on the Mediterranean were interrupted, and during the 1967 war the most important agricultural areas (the West Bank) were lost.

Internal unrest 1970-71 further aggravated the situation, but from 1974 to the mid-1980s, economic growth was strong. However, Jordan was hit hard by the fall in oil prices in the mid-1980s and by trade sanctions against Iraq after the Kuwait War in 1991 and the Iraq War in 2003. Jordan’s business sector has also benefited from the unrest in the region as the many refugees who have come to the country brought with them knowledge and financial assets who have benefited the country. During the first part of the 1990s, growth in the economy was good, but the country was then hit by the international financial crisis. 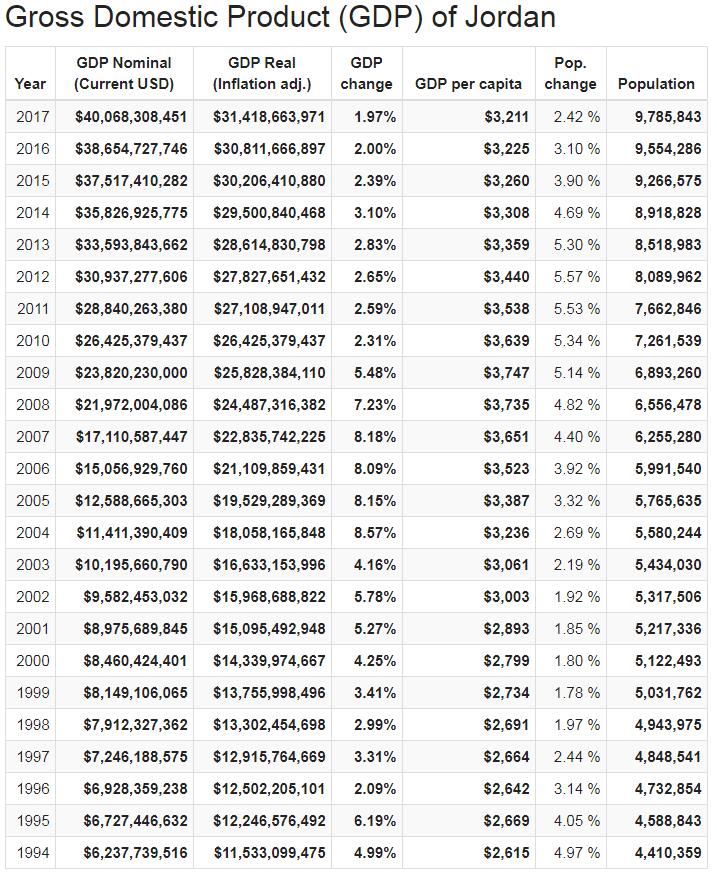 Only 5 percent of Jordan’s area is suitable for arable farming. Grazing land occupies 7 percent of the country’s area. In 2013, agriculture employed 3 percent of the labor force. Large investments have been made in irrigation (the Ghawr project in the Jordan Valley), but more than 90 per cent of the cultivated area is dependent on uncertain rainfall. The return therefore varies greatly from year to year and from area to area. Water scarcity is a major problem and risks becoming permanent. A future reduction of the irrigated area is therefore likely.

In the north-western highlands, cereals (wheat, barley) and fruit trees are mainly grown on slopes. In the irrigated Jordandalen with its subtropical climate, fruits and vegetables are grown, a large proportion of which is exported. Nomadizing livestock farming (sheep, goats) is still important, while fishing and forestry are of no economic importance.

Jordan is a mineral-poor country; however, there are phosphate deposits at al-Hasa and Shidiya. It is the world’s third largest producer of phosphate. Pot ash is extracted from the Dead Sea, and smaller discoveries of oil and natural gas have also been made. However, Jordan is completely dependent on oil imports. During the 00s, investments were made to develop wind and solar energy, but no larger-scale production has yet started.

Despite the lack of domestic natural resources and a small domestic market, the industrial sector has grown a lot since the 1970s and now employs 20 percent of the workforce.

The most important industrial branches are manure production, oil refining, cement production and manufacturing of consumer goods. The country is also one of the region’s largest salt producers. Much of the industrial production is concentrated in the cities of Amman and az Zarqa. Jordan has several special industrial zones that can produce goods for duty-free exports to the United States. However, these zones have never been of decisive importance to the economy since most factories have foreign owners, often Chinese, and employ cheap foreign labor.

Tourism’s importance to the Jordanian economy is gradually increasing, but the industry is heavily influenced by the political conflicts in the region. In 2012, 4.2 million tourists came to Jordan, mainly from the local area. The country’s main tourist attraction is the ancient city of Petra with a large number of temples and tombs. Petra was a hub for trade in fabrics, glass, metals, myrrh and incense even before our era and is sometimes described as an ancient Hong Kong. Other sights include Aqaba Bay, which attracts with good bathing and diving opportunities and the desert of Wadi Rum with its traditional Bedouin culture.

Garlic, spices, dates, pine nuts, citrus fruits and lamb are common features of Jordan’s food attitude, which has in many ways retained the traditions of the Bedouins. Yogurt is very common as a drink and as a sauce, hummus (chickpea paste with sesame oil) is an almost daily accessory. Various forms of dolmar, meat wrapped in vine leaves, or mahshis, stuffed vegetables, are everyday foods.

The party food in front of others, with clear roots in the Bedouin culture, is mensaf. The dish is cooked in two steps. First, the lamb meat is seasoned with herbs in jameed, dried yogurt diluted with water. After several hours the preparation itself begins, as large trays are covered with flat bread cakes moistened with yogurt. Then a layer of rice followed and finally the lamb stew, sprinkled with pine nuts and raisins.