According to countryaah, the economy of the old agricultural country of Iraq has been completely dominated by oil in modern times. In 1988, Iraq was the second largest Saudi oil producer in Saudi Arabia, and in 1980-87 oil exports accounted for more than 98 percent of export revenue. The 1990 UN embargo brought a halt to the country’s oil exports. Until 1994, the drop in oil exports was estimated to have cost the country equivalent to SEK 500 billion. In December 1996, Iraq was allowed to export oil again, though to a very small extent and under strict UN supervision, the so-called food for oil program. Export revenues were earmarked for reconstruction work and food imports. During the late 1990s, oil exports increased, and in 2002 it amounted to about 75 percent of the 1988 level. The military defeat of the US-led coalition in 2003 again meant that the country’s economic administration and parts of the private industrial sector stopped functioning. With the help of international aid and loans from the World Bank, attempts have been made to rebuild the country’s total rationed business. The recurring attacks, corruption and political instability have made the construction process very slow. 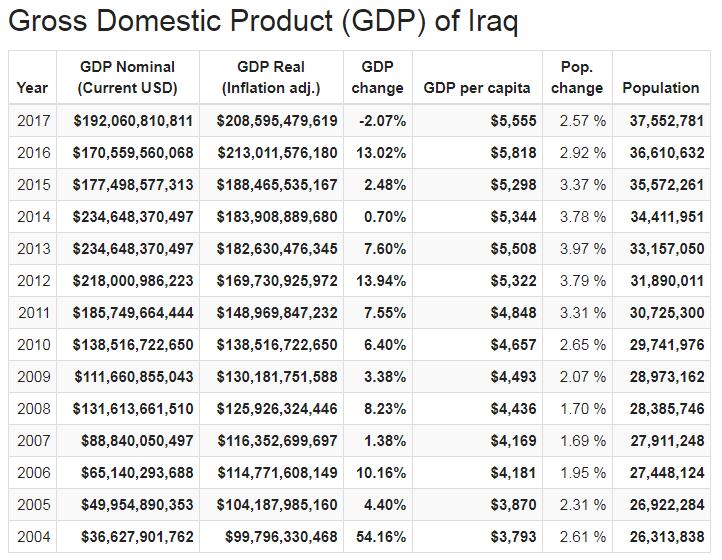 Despite the oil’s dominant position in the country’s business, the state continued to invest in agricultural development during the 1980s. The cultivated area increased and parts of agriculture were privatized. The cultivation area was 3.6 million ha in 1989. After the Kuwait War, agriculture, like other parts of the business sector, has been hit hard, and the privatization begun has been transformed into increased state ownership. The most important crops are wheat and barley. Other agricultural products are rice, maize, cotton, tobacco and fruits and vegetables. Forestry and fishing are poorly developed. Despite Iraq’s perhaps highest agricultural potential in the Middle East, production has stagnated or even decreased in key areas, with food shortages as a result. This is largely due to inadequate drainage within irrigated areas with consequent salinization damage to the soil.

The oil is Iraq’s most important raw material by far. The country has the world’s fifth largest known oil reserves. In 2013, these were estimated at 141 billion barrels. Only a small part of the reserves are recovered. Nevertheless, Iraq is the second largest producer of oil in OPEC (after Saudi Arabia); In 2013, the country produced 3 million barrels per day. Iraq also has large gas deposits, mainly located in the southern part of the country.

After years of sanctions and wars, the country’s infrastructure for extracting and transporting oil and gas is greatly neglected. The country has 14 refineries in production but most are in need of renovation. The majority of known oil reserves are in southern Iraq (about 60 percent), while just under 20 percent are in the northern parts.

Oil production occurs mainly in three major oil fields: the southern and northern Rumaylah fields, west of Basra, and the Kirkuk fields at the city of Kirkuk in the north. Production in southern Iraq is controlled by the central government, while at Kirkurk they are controlled by the regional Kurdish administration.

In 2013, Iraq was the world’s sixth largest oil exporter. Exports went mainly to the United States and to refineries in other parts of Asia.

The country also has deposits of sulfur and phosphates. Sulfur is mined near Mosul. Phosphates are mined in the Akashat area northwest of Baghdad. In addition, there are some deposits of iron, copper and uranium.

90 percent of the primary energy comes from oil. Electricity production is mainly based on oil-fired power plants (more than 50 percent), but also on gas turbines (26 percent) and hydropower (21 percent) from the many dams built along Tigris and its inflows. Production was seriously damaged during the war against Iran and Kuwait. Despite major efforts, reconstruction has been slow, while the need for electricity has constantly increased. In 2014, the electricity shortage was still great, and many have provided their own generators to meet their needs.

In 1964, all major industrial companies were nationalized, and industrial policy’s goal since then has been to replace imports with domestic production. With the exception of oil refineries, however, the industry is poorly developed. Primarily, products are produced based on oil or raw materials from agriculture. The largest industries are the textile, plastics, fertilizers and construction industries as well as the chemical industry. The majority of the manufacturing industry is concentrated in Baghdad (textile, construction and food industry) and Basra (steelworks, fertilizers, petrochemicals).

The country’s exports are dominated by oil and oil products. The most important import goods are food, medicine, machinery and vehicles. Among the country’s main trading partners are India, China, Turkey and the USA.