According to abbreviationfinder, HU is the 2 letter abbreviation for the country of Hungary.

Hungary’s economy is one of the largest in Eastern Europe. The country has an export-oriented business sector that has attracted a lot of foreign investment capital during most of the 1990s. The manufacturing industry has been modernized and new industries have been added, including car manufacturing and the IT industry. At the same time, the service and service industries have grown strongly; to this, not least a growing tourism industry has contributed. Despite stable GDP growth, the country has for a long time had large deficits in government finances. The country’s unstable finances, as well as dependence on the export industry and foreign investment, made the country particularly susceptible to the global financial crisis of 2008–09. To save Hungary from economic collapse, the country received financial support from the IMF, the EU and the World Bank, among others. In 2010, the economy began to recover, thanks in large part to the fact that exports to Germany again gained momentum. GDP growth for 2014 is estimated at just under 3.6 percent. However, the country’s financial problems remain. 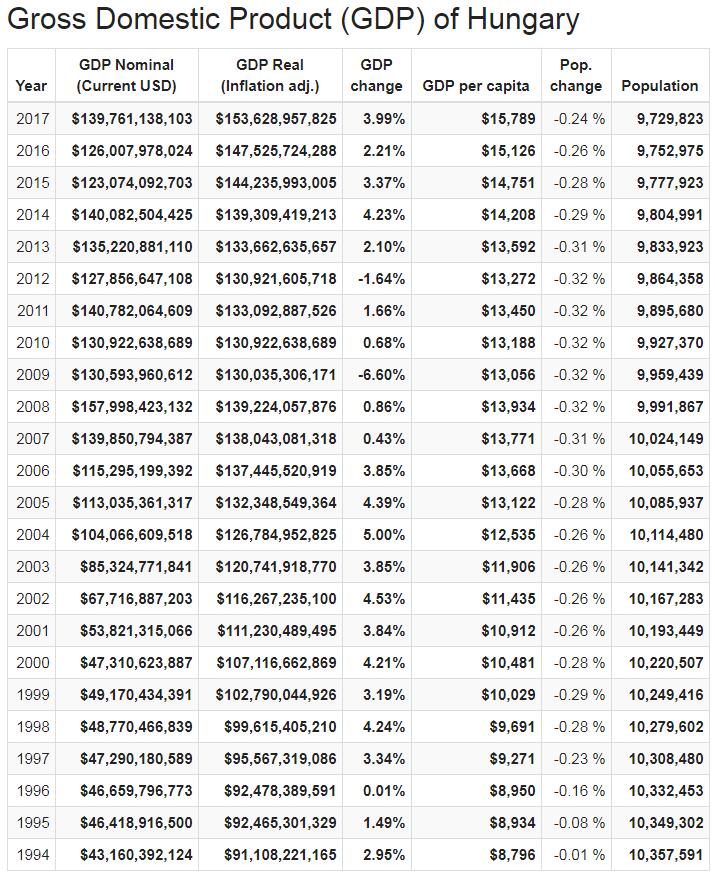 The transition to planning economics took place in 1947–51. Even in a typical agricultural country like Hungary, heavy industry was invested. In the 1950s and 1960s, the political forces seemed to alternate centralization and decentralization. The introduction of the new economic mechanism (NEM) in 1968 was a turning point: Hungary was given a combination of central planning and market economy. The companies were given greater independence with, among other things, free pricing, freer choice of production focus and the opportunity to make their own investment decisions. NEM undoubtedly had success initially, but was slowed down by the Communist Party apparatus. The international recession in the early 1980s had a negative impact on Hungary.

After the fall of communism, for the companies, a privatization was started, which largely took place in collaboration with Western European and American companies.

About 2/3 of the country’s area is usable land. Hungary is among the world’s largest producers of goose meat, canary seed and rye wheat. Other important crops are wheat, corn, sugar beets, potatoes, sunflowers and apple. In northeastern Hungary there are vineyards, where the famous Tokai wines are produced. Half of the agricultural production value comes from livestock management, especially pork, dairy products, chicken meat and beef.

During the Communist era, Hungary was one of Eastern Europe’s most important agricultural producers. In 1960, 90 percent of agriculture was state-owned, but in the 1960s Hungary switched to self-governing units; In 1990, 3/4 of the cultivated land was used by collective and 1/4 of state agriculture. According to the plans, 80 percent of the agricultural land is to be privatized and the former owners and their heirs are given the opportunity to redeem the property. Due to the loss of a large part of the Soviet market and a surplus of agricultural products in the West, Hungarian agriculture has growing marketing problems.

About 1/5 of Hungary’s area is covered by forest; the largest contiguous forest areas are located in the north. Through new plantings, the forest area in 1985–95 has increased by approximately 2,000 km2. However, the forest industry is of little importance.

Hungary produces only small quantities of minerals and the sector contributes marginally to the country’s GDP. The country’s most important mineral deposits are bauxite from the Bakony forest and Vértesbergen as well as the Baranya area in southern Hungary. These form the basis of the domestic aluminum industry. Other notable minerals and industrial minerals extracted are iron, manganese, natural gravel, clay, gypsum, perlite and gallium.

The country is heavily dependent on imports of petroleum and petroleum products. Natural gas and oil are extracted in southern and southwestern Hungary. Most of the gas is imported via the Druzh pipeline from Ukraine and the Hungarian-Austrian pipeline.

About 40 percent (2009) of its own electricity generation comes from the nuclear power plant in Paks near the Danube in central Hungary. In total energy use, oil and natural gas dominate. These assets, like coal (coal at Pécs and lignite in the Miskolcom area), are insufficient and imports are forced. Hungary, like the other Eastern European states, is connected to the Friendship’s oil pipeline. About 8 percent of the energy supply is based on renewable sources.

Even during the interwar period, Hungarian industry was almost entirely based on agricultural products such as mills, sugar mills and canning factories. As in the other Eastern bloc countries, a heavy industry investment was carried out in Hungary; the new steel mill town of Dunaújváros (1950–61 Sztálinváros) can be seen as a symbol of this new direction. The most important industrial sectors were the engineering industry, the chemical industry, the electrical and electronic industry and the food industry. During the first half of the 1990s, the production value of the industry fell by almost 35 percent, in the mining, metal and engineering industries by about 50 percent.

During the 1990s, the Hungarian economy, and thus also the industry, underwent a major restructuring and modernization; including. privatizations and improvements in the quality of goods and services were carried out. The industries that first showed signs of recovery were the lighter industry and the wood and paper industries. Later, the chemical industry also began to show positive signs. During the 1990s, the industrial sector attracted large foreign investments and a number of new industries have emerged, including the telecom, pharmaceutical and automotive industries.

Tourism is well developed and its importance for the country’s economy is steadily increasing. As a planned economic country within the Eastern bloc, tourists were welcomed. Around 9.5 million visited the country in 2010. The three most important destinations are Budapest, Lake Balaton and the Danube Desert.

The two parts of the capital, the high Buda with a fortress and the more spatially planned Pest, are separated by the Danube. Across the river are magnificent bridges. A visit to one of the health baths is a must for the Budapest tourist. Outside the capital, Lake Balaton is the most visited region. The lake is 80 km long and only a few meters deep. This makes it a warm bathing lake and, especially on the northern side of the lake, it is close between holiday villages, campsites and hotels. The scenic Danube Curve lies north of Budapest at Esztergom.

Hungarian cuisine is solid, tasty and must have. Lake fish, cabbage, pork and smoked pork, onions, sour cream and, above all, peppers are excellent ingredients. Famous Hungarian dishes such as goulash, mutton (stew with meat that is too fat to turn into goulash, but also fish or seafood), tokány (shredded beef, white wine, sour cream) and bell pepper (stew with light meat or fish) all of the paprika flavor. Soups are everyday foods, usually flavored with poppy seeds and garlic; they are often eaten with dumplings (csipeteke) or short pasta. Freshwater fish are popular foods: carp, pike and sterling are served uncooked or in pots and soups, often with green peppers, bacon, mushrooms, cream and dill. Roasted goose is a common dish and goose liver is included in many dishes. The relatively heavy food is often served with salads where sauerkraut, salted cucumber, beetroot and marinated or pickled peppers take the main role, they are often seasoned with cumin or horseradish. Despite the rich variety, it is difficult to resist a bit of rétès after the food, the Hungarian variety of strudel that can contain apples, cherries or nuts. Dobo’s torta is a cake with many layers of sugarcane bottoms interspersed with a sweet and powerful mocha cream. Other common desserts are stuffed pancakes and cheese balls with melted butter.