According to abbreviationfinder, GV is the 2 letter abbreviation for the country of Guinea.

Despite large mineral deposits and high agricultural potential, economic development since independence in 1958 has been negative, and Guinea is today one of the world’s 25 poorest countries. As a result of the build-up of the mineral sector in the 1970s, GDP increased by 3 percent per year in 1970-80. However, in the years 1980–85 GDP fell by 1.4 percent per year, which among other things is considered to be due to strong state control of the economy. During the 1970s and 1980s, a large informal sector developed in response to state control of the formal economy. In 1984, several reforms were introduced, such as increased privatization, liberalized foreign trade and the removal of price controls. This led to an increase in GDP growth of an average of 4 percent per year 1988–95 and an increase in GDP per capita.

The positive trend continued in the 1990s with annual growth of about 5 percent, but during the 1990s the growth rate dropped and the 2008 coup d’état turned out to have very negative financial consequences. Comprehensive corruption and substandard infrastructure are other problems facing the country. 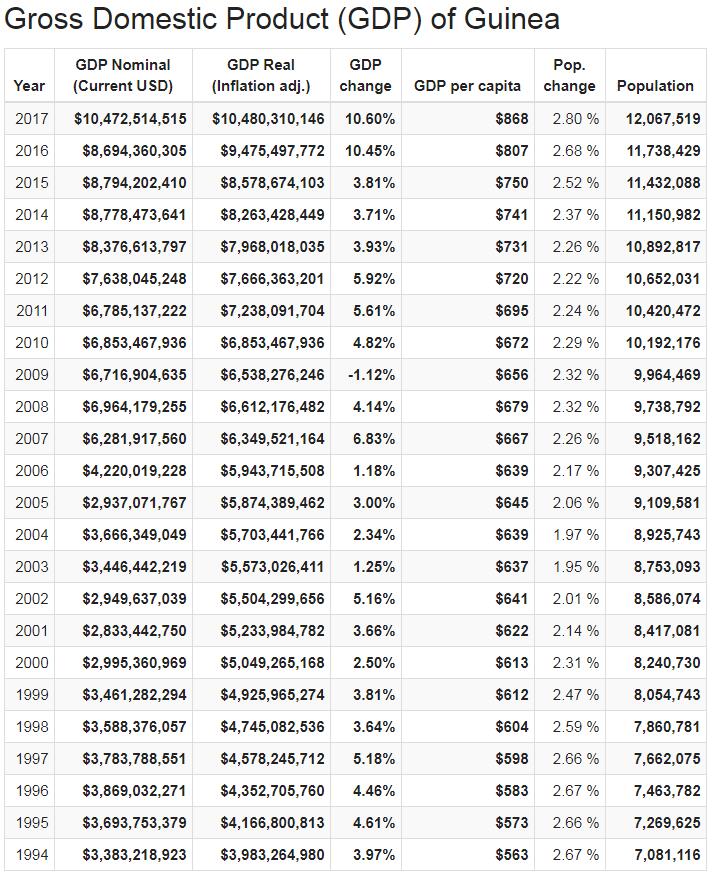 Despite the rapid development of the mineral sector, agriculture is still the most important economic sector. Growth during the 1970s and 1980s was low due to low producer prices and strong state control, which has led to extensive smuggling. During the 1980s, approximately 25 percent of the food requirement was imported. Changing ownership conditions and improved infrastructure led to strong growth in agriculture during the early 1990s, but the country still has to import food.

The most important food crops are rice, cassava, sweet potato and corn. The most important forage crops are bananas, pineapple, oil palm products, peanuts and coffee. Livestock management also plays an important role, but also contributes to deforestation and, ultimately, to soil erosion. Previously, 2/3 of the country’s surface area was forest covered, but felling and burning have been extensive and the corresponding figure is now around 25 percent. However, Guinea still has great potential for forestry. The total withdrawal is estimated to be about 12.5 million m 3 per year, the majority of which is used as firewood. Fishing is relatively underdeveloped, but is considered to have great development potential. Every year, 86,000 tonnes are caught, mostly by foreign vessels, mainly from EU countries that bought fishing licenses from Guinea.

Mining is one of Guinea’s most important economic sectors. Guinea holds 30 percent of the world’s best-known bauxite deposits and is one of the world’s largest producers. Bauxite accounts for more than half of export revenue. Bauxite production increased in 1972-80 from 2.6 million tonnes to 13.9 million tonnes. After a decline due to reduced aluminum demand in the early 1980s, production increased again and in 2010 amounted to just over 17 million tonnes per year. Bauxite mining began in Fria (present Friguia) in 1930, and aluminum production began in 1960 (in 2010, 597,000 tonnes of aluminum were produced). The largest bauxite mines today are found in Boké in northwestern Guinea. The largest, yet unused deposits are found at Debélé and Tougué.

Diamond production increased in the late 1960s, and 80,000 carats were produced in the early 1970s. However, illegal production and smuggling meant that diamond mining was halted in the late 1970s. Production was resumed in the mid-1980s, and in 2010, 374,000 carats were produced. Gold deposits, which are only partially exploited, can be found at Siguiri in Guinea’s northeast. Large iron deposits have been discovered but have not yet begun to be exploited. In the country there are also unexploited deposits of lead, cobalt, copper, chromium, manganese, nickel, platinum and uranium.

Guinea lacks known fossil fuel deposits. However, they are looking for oil on the continental shelf. Water energy accounts for most of the total energy production and the potential for water energy expansion is great. About two-thirds of the electricity is consumed by the aluminum smelter in Friguia, while households largely cover their energy needs through wood burning.

Guinea’s industry is underdeveloped and is primarily focused on importation. The shortage of foreign currency, commodities, skilled labor and technology as well as low domestic demand have also led to low capacity utilization. However, employment in the industrial and service sectors increased from 12 to 30 percent of the economically active 1965-2010. Among other things, there are textile and cement factories as well as the building and food industries.

According to Countryaah, Guinea’s trading situation has improved since the bauxite extraction started in the early 1970s, and since the second half of the 1990s, the trade balance has usually shown a smaller surplus. Bauxite (aluminum) accounts for more than half of the export value; other export products include gold, coffee and diamonds. Imports are dominated by semi-finished products, capital goods, oil and petroleum products, food and consumer goods. The Netherlands, Ghana and China are important trading partners.

According to abbreviationfinder, ET is the 2 letter abbreviation for the country of Ethiopia. Business Ethiopia is considered one of the world’s poorest countries. The majority of the country’s population rely on agriculture and livestock management. To the extent that industrial establishment has taken place, it has mainly been concentrated to the capital with surrounding […]

According to abbreviationfinder, AO is the 2 letter abbreviation for the country of Angola. Business Large parts of Angola’s business were razed during the liberation war and the recovery was hampered by the war situation that existed in 1975–2002. As a result of rising oil exports, the country has experienced very strong economic growth during […]

According to abbreviationfinder, CV is the 2 letter abbreviation for the country of Cape Verde. When the Portuguese settled in Cape Verde islands in the 15th century, the islands’ name (Verde = green) corresponded to nature. They were covered by dense tropical rainforest that was in sharp contrast to the black volcanic rocks and the […]