According to abbreviationfinder, GA is the 2 letter abbreviation for the country of Gambia. Even Gambia, like almost all the ‘young’ African countries, has planned its economic development, despite the presence of modest resources and a production structure burdened by the weight of monoculture: the peanut (which has registered a contraction from mid 1990s) alongside subsistence food crops (rice, millet, cassava). The only industries are basically the processing plants linked to the primary sector. In 2008, all primary activities employed almost 4/5 of the workforce but contributed to forming 33% of GDP. Projects for the diffusion of irrigated rice cultivation in the middle valley of the Gambia, started since the 1970s with the technical and financial assistance of foreign countries and international organizations, have resulted in failures, as incompatible with the customs of Gambian rural society. Rice, other commodities and live animals represent about 1/3 of the value of imports. The country is totally dependent on overseas for energy supplies. The service sector has seen a strong expansion due to the development of tourism activities. Before the political changes of 1994, which had a negative impact on the number of visitors, more than 100,000 Europeans per year spent holidays, between November and April, on the beaches of Banjul and its surroundings; visitors have returned above 90,000 since 1998.

The main axis of internal communications is the Gambia (crossed by regular shipping lines), since the roads passable throughout the year (including, that is, the rainy season) have a relatively modest development (about 3742 km, of which 711 km asphalted) and the railways are completely missing. Foreign relations are ensured, on the other hand, from the port of Banjul and from Yundum airport, 33 km from the capital itself.

Gambia’s national economy is also very weak in an African perspective. With few exceptions, the country’s trade balance has shown deficits since the mid-1970s. Since the 1994 coup, the regime has invested in a market-oriented policy with the support of the International Monetary Fund (IMF) and the World Bank. Due to the lack of human rights, for example, the United States has chosen to stop the aid money.

Previously, the country’s GDP fluctuated sharply, mainly due to recurring dry periods, but during the 1990s, some stabilization occurred; since 2007, annual growth has been above 5 percent. The main focus of the economy lies on agriculture. Other important elements of the country’s business are tourism and trade, the latter with a large element of re-export to other West African countries, which has, however, declined in recent years.

Agriculture is dominated by peanut cultivation for export, but the yield has varied due to drought and insect infestation. The main supply crop is rice, but Gambia has problems getting domestic cultivated rice on the market, which is why it has been forced to import. 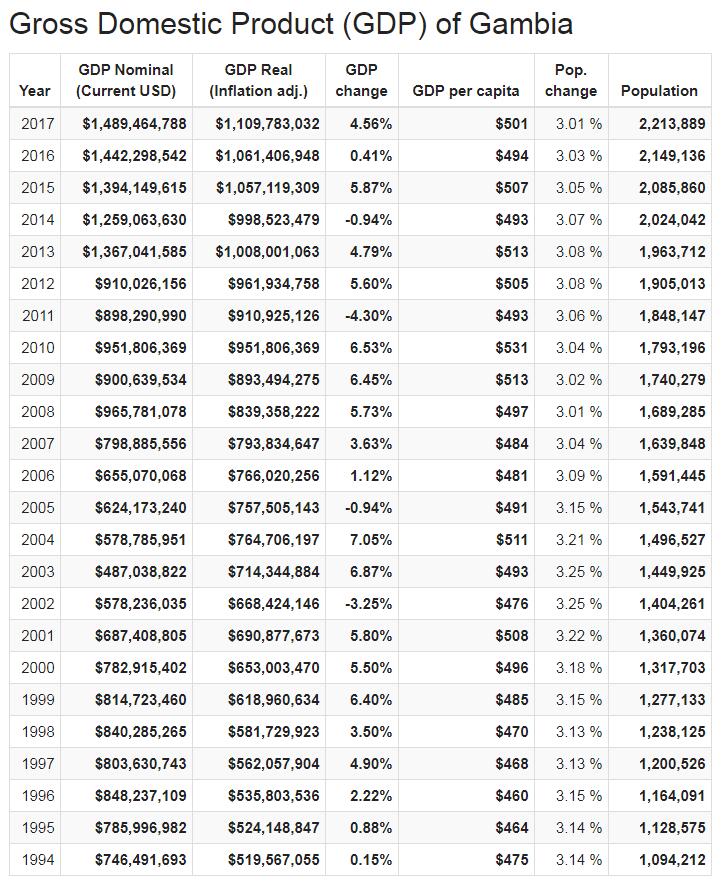 According to Countryaah, tourism is of great importance to the Gambia economy; In 2013, the number of tourists was approximately 170,000. Swedish stakeholders played an important role in the first build-up phase of Gambia’s tourism and after Britain, Scandinavia still stands for most tourists.

Many touristy Swedes know the Gambia through a Swedish hotel establishment on Cape Saint Mary, a cape in the Atlantic not far west of Banjul. The hotel district there benefits from fine beaches and comfortable bathing water (very flowing). Nearby is a nice small nature reserve (Abuko) with interesting birds, for example several species of kingfisher and heron and shadow bird. The museum, the Anglican cathedral and the block surrounding the presidential palace in Banjul are reminiscent of the British colonial era, however, much of the capital is in decline. A boat trip up the river offers interesting scenery and some historical monuments. The Gambia is also interesting as a starting point for excursions to Senegal.

The population mainly feeds on rice, manioc, sweet potato, peanuts and peanut oil. The cultivated crops are the basis for pots and soups, often enriched with fresh or dried fish. Soup on rice and fish is everyday food, as are pots with cooked fish and peanut sauce or porridge on millet or rice with fish sauce cooked on dried fish. Fresh fish (bream, hake, sea sole) is often filled with onions, parsley and cayenne pepper, roasted in peanut oil on a bed of vegetables, root vegetables and pieces of dried fish and served with steamed rice. Chicken or chicken turn into casserole with peanut paste or with the usual tomato paste. Beef, the second most common source of animal protein, can be e.g. turn into domeda: a spicy meat stew with peanut paste cooked in oil; In general, the food is spicy.