According to abbreviationfinder, TP is the 2 letter abbreviation for the country of East Timor.

By the end of the 20th century, East Timor was a very poor area, entirely focused on agriculture. Most of the business and almost all infrastructure was destroyed during the violence that followed in 1999 following the referendum on independence. With great support from the rest of the world, reconstruction began quickly, but lack of resources and population poverty meant that the new country’s economy grew slowly. Poor growth and a new wave of internal violence increased poverty. 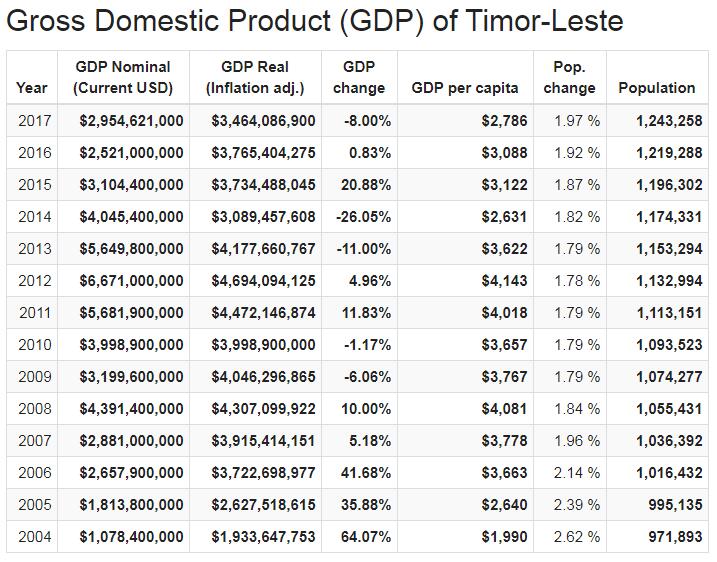 A more radical change began after the mid-00s, when oil and natural gas extraction started in the sea south of Timor. Part of the tax and royalty income therefrom will benefit East Timor and be invested in a petroleum fund established in 2005. Since then, the fund has grown very strongly and at the end of 2010 it contained funds corresponding to close to USD 7 billion. The money is invested in foreign government bonds and from the fund, the East Timor Government annually raises funds that are much larger than all revenues to the state budget. The funds are used for capital investment, primarily for education, electrification and other physical infrastructure that are long-term and necessary for the country’s development. Some of the Fund’s funds will be saved for future generations. East Timor’s economy became one of the most oil-dependent in the world during the latter part of the 1990s, but the fund means that the country has a stable economy for several years to come. Data on the extraction and export of crude oil and natural gas are not included in the country’s usual GDP statistics, which makes it misleading and difficult to interpret.

According to countryaah, calculations of the Human Development Index (HDI) in the mid-00s placed East Timor among the world’s least developed countries, and in Asia only Afghanistan had worse values. In 2017, the country had advanced to place 132 among 189 ranked countries. This was almost entirely a consequence of the country’s large oil revenues. More than 40 percent of the residents live below the poverty line and among the poor, malnutrition has increased. two thirds of the population still lives in the countryside. There, most people have poor road connections and lack electricity, sanitation and most of the basic community service. The investments around 2010 went primarily to rural development projects.

Apart from work in agriculture and in informal services in the cities, jobs for young people are lacking and among them unemployment is very high. The industry is insignificant and oil and natural gas extraction at sea has hardly any work for the low-skilled. Private enterprise is almost completely lacking and foreign investment has so far been insignificant. The state’s current expenditure is covered by one third of aid from other countries and international aid organizations. The largest donor is Australia, which provides support for development of administration, justice and security apparatus. Sweden’s assistance in 2010 amounted to SEK 33 million for the development of human rights, equality and democracy.

A quarter of the country’s area is cultivated and more than 75 percent of the population receives their livelihoods through livestock farming, largely self-catering. The most important foods are corn and rice, and to a lesser extent cassava, soybeans and sweet potatoes are also grown. The yield is relatively low and agriculture is often exposed to extreme weather in the form of both long dry periods and violent rains with devastating floods. The violent internal contradictions in 1999 and 2006 also caused great damage to agriculture when roads and irrigation facilities were destroyed and people fled from the home town. During the 00s, agricultural production increased, but not at the same rate as the rapid population increase. Food imports have therefore increased, and periodically, for example, in 2007, the country has needed disaster relief in the form of food.

Coffee is basically the only barley crop. It is produced by small farmers, some organized in sales cooperatives. Coffee has been grown since the Portuguese colonial era and is of high quality. It has always been grown without chemical agents and can therefore be sold on the world market as organic coffee and at a high price. Coffee represents 95 percent of non-oil or natural gas exports. The state is now encouraging the cultivation of other forage crops such as coconut palm and vanilla to broaden exports.

Half of the country’s area is wooded (2010). By tradition, woodland has been part of Sweden agriculture and timber has also been used as fuel. Original tropical rainforest does not exist. Gradually, more and more of the inland steep slopes have been cultivated and this has led to serious erosion. About 6 percent of the forest land is planted, usually with teak. Large-scale logging does not occur, as there are no transport routes, but since the beginning of the 1990s, forest area has been reduced annually by 1.3 to 1.4 percent. A national plan for sustainable forestry has been drawn up, but so far there are no resources to implement it.

The waters around Timor are rich in fish, but traditionally fish have played a lesser role in the diet than in other coastal areas in Southeast Asia. There is self-catering fishing with very small boats along the coast, and as long as the transport routes are poor, it is not possible to develop a fishery for sale to a larger domestic market. Since agricultural production is not enough to prevent malnutrition in East Timor, increased fishing would be important, and the state has presented various measures to develop a fish industry with foreign aid.

The only significant mineral resource on land is high quality marble that has been mined for a long time. However, recovery decreased during the 00s.

In Timor Lake off the south coast of the country there are considerable assets on oil and natural gas. Oil deposits were found already in the 1970s and significant natural gas fields in the 1990s, but unclear boundaries led to protracted disputes between Indonesia and Australia and eventually the independent East Timor. Difficult were also the questions of how oil revenues would be distributed among the states and where plants for the transfer of natural gas to liquid form would be placed. Currently, a fifty-year 2006 agreement between Australia and East Timor applies.

Extraction of natural gas first started in the Bayu-Undan field and production rapidly increased to a maximum in 2008. It has subsequently declined and assets are expected to reach the end of the 2010s. The natural gas is pipelined to Darwin on Australia’s north coast where it is converted to liquefied gas, LNG, which is exported to Japan. East Timor’s income from this is entered into the country’s petroleum fund. A more extensive oil and natural gas field, Greater Sunrise, lies further east in Lake Timor. Revenues from this are to be shared equally between East Timor and Australia, but production will probably start only at the end of the 2010s. Natural gas and oil revenues are extremely important for East Timor’s economy at present and for the country’s long-term development.

East Timor began to be electrified in the 1990s, but the electricity system was destroyed in 1999. It was rebuilt and in 2003 more than 20 percent of households had access to electricity, mainly in the cities. Electrification continued to be a high priority in the extremely poor country and in 2007, 88 percent of city households received electricity, mostly from diesel generators. The first hydropower plant was built in the late 00s. In the heavily hilly countryside, it is very difficult to develop electricity grids and therefore biogas-powered local power plants that can be run by village cooperatives are planned.

During the Indonesian era until 1999, there was largely no industry in eastern Timor. Craftily and to a small extent, textile goods and furniture were manufactured, and there was also a plant where coffee beans were processed before export. Even the independent East Timor has so far lacked almost the entire industry except for simple textile production and the production of food and detergents. There are also some major factories for treating coffee beans and for bottling water.

There is no domestic capital, both state and private, for industrial enterprise. Foreign investment capital is also not attracted to the country which has inadequate electricity supply and other infrastructural problems, undeveloped regulatory system for entrepreneurship and low educated labor, but relatively high wage levels.

In 2017, more than a quarter consisted of vehicle imports and slightly less fuel. In addition, rice and other food, machinery and electronic and electrical products as well as medicines were added. About 33 percent of imports came from Indonesia, 19 percent from Singapore, 17 percent from Australia and 12 percent from Vietnam.

Since the middle of the 1990s, exports consist almost entirely of natural gas and crude oil, which probably accounted for just over 99 percent of export earnings. Coffee exports, mainly to the US and Germany, represented only one percent of the country’s total exports. Revenues from natural gas and oil exports are transferred directly to a fund and are not included in the trade statistics. If this income is included in the country’s balance of payments, it showed a very large surplus annually. Information on exporting countries is missing.

At the end of the 1990s, only 30,000-40,000 tourists came to East Timor annually. Larger hotels and other tourist facilities are missing, domestic transport conditions are poor and air fares to the country are dauntingly high. Tourism is therefore not a significant source of income for the country in the near future.