According to abbreviationfinder, CM is the 2 letter abbreviation for the country of Cameroon.

From 1960 until the mid-1980s, Cameroon was financially successful. According to countryaah, this was due, among other things, to an active agricultural policy, with the aim of broadening production and achieving self-sufficiency in food, as well as the development of the oil industry from the late 1970s. Falling oil prices around 1986 led to a decline.

State interventions to stop the economic decline have led to the introduction of an adjustment program, which included extensive public sector cuts, a 50 percent devaluation and extensive privatization work.

Since 1994, the country has experienced positive growth. Newly discovered oil sources, increased productivity in agriculture and government investments in infrastructure have meant that growth has averaged five percent during the 2000s.

Traditionally, Cameroon has had a surplus in the trade balance, mainly due to oil exports, but due to the fall in prices of other important export goods (cocoa, coffee and cotton), the trade balance since 2009 has shown a deficit. 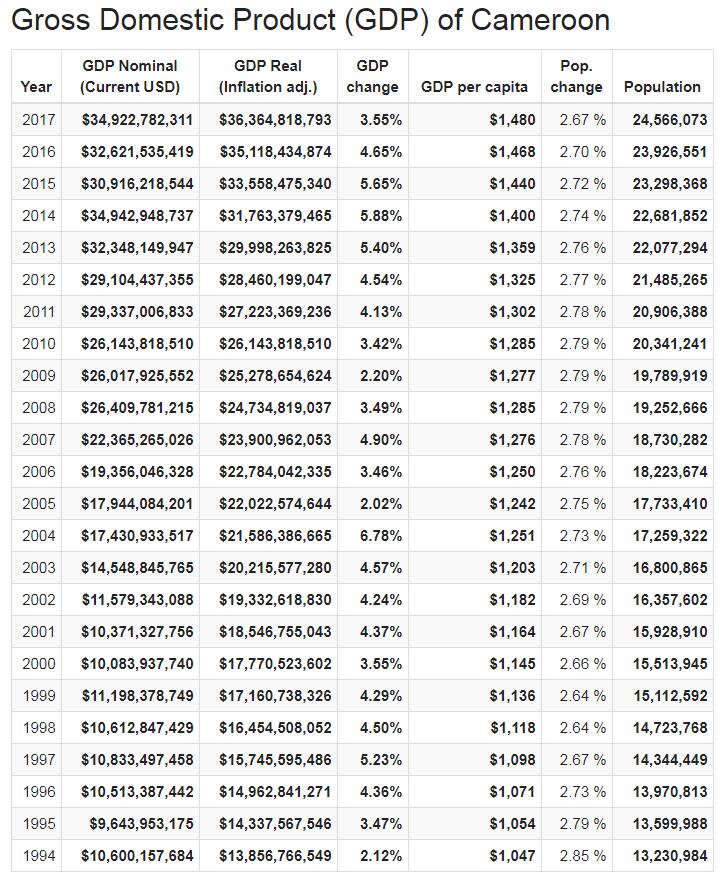 Agriculture, together with the oil industry, is the backbone of Cameroon’s economy. Along with forestry and fishing, the agricultural industry accounted for 40 percent of the country’s export revenue. Agriculture has been a priority sector, and Cameroon’s oil revenues have been partially used to subsidize it. With the exception of rubber and palm oil production, which is carried out in plantation form, agriculture is dominated by small farmers. Food independence has increased faster than population growth during independence, and Cameroon is largely self-sufficient in terms of food.

The main food crops are millet, sorghum, corn and rice. Cocoa and coffee, which are grown in the south and west, as well as cotton, are grown in the northern parts of the country. Palm oil, rubber and bananas are also exported. An important element of the sector is also livestock management.

Oil was discovered on the continental shelf near the border with Nigeria in 1976, and extraction began in 1977. In 2013, production was estimated at 63,000 barrels per day, and the oil accounted for about 50 percent of the country’s export revenue. The main production takes place in the Niger Delta. The lack of new finds and a high price in comparison with competing countries has caused production to fall in recent years; the oil is expected to end within ten years if no new sources are opened. In 2003, a 1,000 km long pipeline from the oil fields in Chad to the port city of Kribi was completed. The country also has known deposits of bauxite, iron ore and uranium. Of these, only the bauxite deposits have been exploited. at Minim-Martap and Ngaouandéré.

About 50 percent of Cameroon is wooded, but harvesting is only allowed on half of this area. Intensive forestry is conducted in an area of ​​approximately 500,000 ha in southern Cameroon. The forest industry has good prospects for expansion if the very difficult transport problems are currently solved.

Cameroon’s fishing is little developed. Opportunities to develop fisheries have been limited due to fishing border disputes with neighboring countries and drought affecting inland fishing.

80 percent of Cameroon’s total energy needs are covered by water energy. The power plants at Edéa and Song-Loulu supply the country’s western parts, including Yaoundé, Douala and Edéa, with electricity. The power plant at Logda mainly supplies the northern parts. The country’s heavy industry is the main consumer.

Cameroon’s industrial sector is dominated by the processing of domestic and imported raw materials and the composition of imported components. The largest plant is the aluminum smelter at Edéa, which receives its raw material from Guinea.

In order to better integrate the industry with the rest of the economy, investments have been made in the pulp and paper industry, tire production, oil refining and tanning. The industrial industry consists of a few large factories and a large number of small units; medium-sized factories are almost completely missing.

Cameroon was visited by 817,000 tourists in 2012, an increase of 200,000 from the previous year. However, tourism is still poorly developed and the country is suffering from poor infrastructure as well as accusations of corruption and high crime. What mainly attracts visitors are the nature experiences and the rich wildlife, including in the country’s national parks, as well as the many sandy beaches.

Almost 95 percent of the calorie intake in the country comes from vegetables, mainly manioc, corn, sweet potatoes, rice, bananas, millet and sorghum. The traditional pot of canarin contains fresh or dried fish. The “national soup ” nkui is cooked on okra, corn husks and cornmeal. Other special dishes include baptism, sautéed banana croquettes, perhaps in combination with snake stew. Beef, which is relatively uncommon, is eaten in ragues with couscous, which in Cameroon is cooked by cornmeal.