According to countryaah, Brunei gained independence under extremely favorable circumstances, considering that it is a third-world country: a relatively small population; one income per population of approx. $ 20,000 annually; a modest unemployment; a generous social system and a considerable reserve of foreign capital: $ 14,000 million in 1984.

The main causes of conflicts from that point on became the internal power struggles in the royal family and the presence of foreigners on all key posts in the public sector, in the economy and in the army. 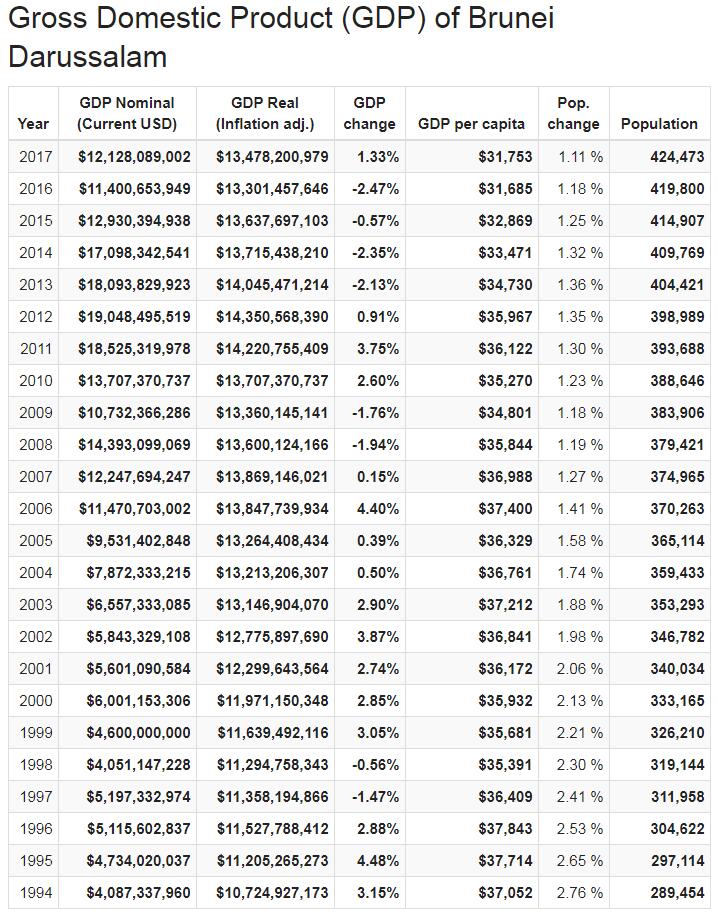 The main internal problems were the lack of basic education and the conditions for the country’s minority groups, especially the Chinese. Even with refined legislation providing financial aid for transportation and food for students, illiteracy continued to rise – an estimated 45% of the population was illiterate in 1982 – and significantly weakened the opportunities for national participation in local administration.

On the other hand, the Sultan, who was prepared to economically depend on a volatile natural resource such as oil, sought to make production less one-sided and promoted the formation of a new class of landowners who were encouraged to seek self-sufficiency in the food field; Brunei imported almost 80% of its food. Only about 10% of the country’s total land was cultivated and there was a widespread tendency for the smaller landowners, especially rubber farmers, to move to the larger cities.

Brunei has become financially dependent on a complex of multinational corporations. The company Brunei established with Brunei Shell Petroleum and Mitsubishi to extract natural gas deposits, plus the shipping agreement entered into with Royal Dutsch Shell, as well as the oil extraction concessions issued to Woods Petroleum and Sunray Borneo, led to national decision-making processes came an element of powerful foreign interference.

In March 1985, the government formed an Energy Control Board to oversee and control the activities of the semi-state, semi-multinational Brunei Shell Petroleum Co..

Brunei’s accession to ASEAN and, as UN member 159, in 1984, provided international support for the new nation.

20% of the Sultanate’s inhabitants live below the $ 500 monthly subsistence minimum. 90% of all consumer goods, including food, are imported and therefore the cost of living is quite high.

In early 1987, it was reported that the Nicaraguan counter-movement had received $ 10 million in financial assistance as a donation from the Sultan of Brunei. It was a response to an inquiry by U.S. Colonel Oliver North about illegal support for the contras, and the amount had been transferred to a bank account in Switzerland.

History. – In December 1962 the sultan of Brunei had to face the revolt of the North Borneo liberation army, an organization linked to the People’s Party, which opposed the planned entry of Brunei into the federation of Malaysia. The rebels proclaimed the ‘Revolutionary State of North Kalimantan’, but the revolt was quelled, a state of emergency was declared and the People’s Party was outlawed. From that same year, Sultan Ali Saiffudin ruled by decree and maintained a state of emergency. In 1963, however, it was decided that the Brunei would not join the federation. In October 1967, the sultan abdicated in favor of his son Hassanal Bolkiah.

After the 1959 agreement with Great Britain, on the basis of which the latter assumed responsibility for the Defense and Foreign Affairs of the Brunei, in November 1971 a further agreement guaranteed the sultanate full internal autonomy. In December 1975 the UN asked that Great Britain withdraw from the Brunei and that general political elections be held in that country. In January 1979 an agreement was signed according to which the Brunei would obtain full independence within five years, after receiving a guarantee that Malaysia and Indonesia would respect his sovereignty. Independence was proclaimed on January 1, 1984. The sultan assumed the post of prime minister and kept the portfolios of finance and the interior for himself. In February 1988 the Brunei National Democratic Party was dissolved