According to abbreviationfinder, AT is the 2 letter abbreviation for the country of Austria.

Austria has long been one of Western Europe’s less prosperous countries, but in recent decades the economy has developed positively. The country’s economy is strongly dependent on foreign countries and is characterized by a positive trade balance, a positive balance of services as well as large tourist income and foreign investment. Business and industry are dominated by the service and service sectors, particularly important are tourism, banking and finance. 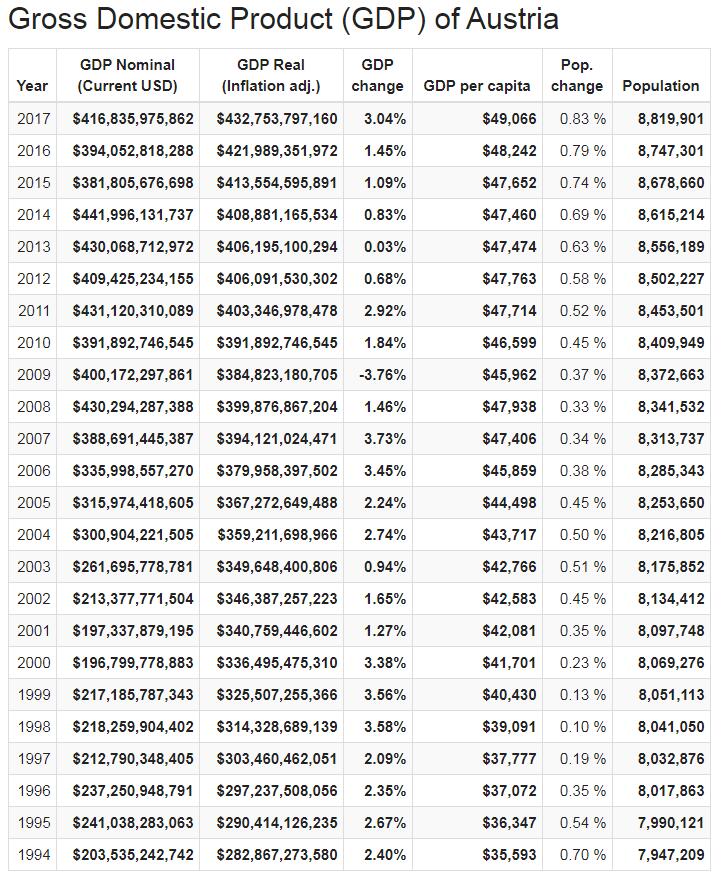 After years of stagnation, the country’s economy was restructured in the early 1990s; business was deregulated and taxes increased, while cuts in the public sector and the social insurance system were implemented. The changes contributed to a better budget balance for Austria. Foreign investment has long been significant. German companies in particular – but also many companies from other countries in Western Europe – have long been established in the country. The enlargement of the EU to the east has led Austria’s business sector to a greater extent to Eastern Europe. A large part of the Austrian investment abroad went to Hungary and the Czech Republic during the 2000s. Since 1995 Austria has been a member of the European Union (EU).

Austria is among the world’s leading countries in the production of currants and gooseberries. Other important crops are wheat, sugar beets, potatoes, apple and corn.

About 2/5 of the country’s area consists of agricultural land. The most intensive and varied agriculture is found on the plains of Upper Austria, Lower Austria, Burgenland and Styria. In the higher areas, crops and intensity are dependent on soil, elevation and climate. In the higher alpine valleys there is almost only animal husbandry.

As late as 1960, agriculture accounted for about 25 percent of employment, now the proportion of employed in agriculture is down to 5 percent. At the same time as employment has dropped dramatically, production has increased strongly. The country produces far more than its residents consume, especially with regard to cereals, meat, cheese and wine. The average area has also increased, but there are still a large number of small units. In order to cope with international competition, Austrian farmers have increasingly switched to organic farming.

Austria is one of Europe’s most prosperous countries – about half of the country’s area is covered by forests. Particularly forested regions are the northern side of the Northern Calcium and the lower mountain areas of Carinthia and Styria, the border areas with the Czech Republic in the north and Wienerwald. The forest is the base for the paper and wood products industry, which is one of the country’s most important export industries.

The mining industry has ancient origins in the Eastern Alps – especially in Carinthia, Styria and Salzburg. The ore assets have resulted in a varied steel and metal products industry.

Iron ore is mined in the Erzberg quarry and tungsten in the Mittersill mine. The most important industrial minerals are dolomite, gypsum, kaolin, lime, magnesite, salt, quartz sand and talc. Austria is one of the world’s leading producers of tungsten, magnesite and plaster.

The value of the mineral sector (excluding crude oil and natural gas, which is largely imported) corresponds to approximately 0.4 percent of GDP (2010). Almost all companies in the sector are privately owned. The mineral sector provides a fairly high degree of self-sufficiency (approx. 1/3), but is largely a loss-making business and its importance for employment is marginal. The country’s largest company is semi-state OMV, which is Austria’s leading gas importer.

The industry is traditionally largely commodity-based. Until the end of the 1980s, much of Austria’s industry was state-owned. In the early 1990s, industrial privatization began, and less than ten years later, no state-owned companies remained. The steel, metal and machine industries account for about 1/3 of industrial employment. Other important industries are electrical engineering, textiles, chemistry, paper, wood products and food. The element of foreign industrial capital is significant; it is particularly large in the automotive, chemical and food industries as well as the electrical industry. The country’s textile, shoe and leather industry has found it difficult to cope with the competition with low-wage countries and much of it has moved abroad.

According to Countryaah, Austria is heavily dependent on foreign trade. The trade balance has been negative for a long time, but at the beginning of the 1990s the deficit was changed to a certain surplus. The most important export products are semi-finished products for the manufacturing industry and capital goods, while the most important import goods are raw materials, fuel and cars. Germany is the dominant trading partner, followed by Italy and Switzerland.

Austria is a major tourist country and is visited annually by about 22 million tourists, half of whom come from neighboring Germany.

The western parts of Austria are occupied by the Alps, where the popular winter sports attract many visitors throughout the year. The most famous are Sankt Anton, Kitzbühel, Zell am See, Seefeld, Saalbach, Badgastein and Innsbruck (which twice arranged the Winter Olympics). Vienna is the country’s largest tourist city. Inside the impressive Ringstrasse lies the medieval town plan with the St. Stephen’s Cathedral as the natural centerpiece. There are also among others. the Natural History and Art History Museum, the Staatsoper and the Imperial Hofburg. The Schönbrunn castle is located in the city’s southwestern outer area.

Several of Austria’s other cities are of great interest: Graz with the famous old bell tower on the southern slope of Schlossberg, the beautifully located Alpine town of Innsbruck with the former residence Fürstenberg, famous for its richly decorated bay language Goldenes Dachl (Golden Roof) and Mozart’s birthplace southern festive baroque style. Salzburg is also known for its many music events, especially the Salzburg Festival Games at the end of the summer. Everywhere in Austria there are also beautiful castles and castles, as well as monastery churches such as Melk and St. Florian.

In addition to elements from the Balkan Peninsula, Austrian cuisine also features German, Italian and Hungarian cuisines. Meat occupies a large part of the diet; In addition to the compulsory Viennese schnitzel there are many other dishes of veal (Kalbsbraten, gefüllte Kalbsbrust and Kalbsvögerl). Well-cooked, cooked meat (Tafelspitz) served with salad and fruit compote is common. Chicken is popular, roasted with paprika sauce it is presented as Paptikahuhn; gefülltes Brathuhn has well-seasoned bread filling. Among the pork dishes are mainly pork (Schweinsbraten) and ham. Wild meat (hare, deer, pheasant and wild boar) also occupies a non-despicable part of the menu. The meat dishes are often served with cucumber or Krautsalat(boiled cabbage in salad form) and dumpling (Semmel dumpling with white flour, Spec dumpling with pork, Liver dumpling with liver) and a powerful, preferably sweet or sour cream sauce with fruit or berries as a flavoring ingredient. Pasta (noodle) and gnocchi (Nockerl) are also common accessories. The fishing rights are restricted to freshwater fish for natural reasons. Trout, pike and carp are often served roasted, breaded in crust flour or deep fried in a beer-based batter (im Bierteig). Trout cooked in vinegar (Forelle blau) is a well-known specialty.

As a dessert, there is a wide selection of Mehlspeisen (hot, often pudding-like dishes). These include Strudeln, which is not only cooked with apples but also often with cream cheese or cherries. The dumpling with fruit or berries is also available, as are the famous pancakes Palatschinken with apricot jam or cream cheese. For those who, for adventure, need to fill a void between meals, Austria is something of a Mecca; pastry shops and cafes serve sumptuous pastries that personify the Central European pastry culture. In addition to the sachet cake, Dodos-Torte with caramelized surface, Linzer-Torte with hazelnuts and the rose glazed Punschtorte.