According to abbreviationfinder, AO is the 2 letter abbreviation for the country of Angola.

Large parts of Angola’s business were razed during the liberation war and the recovery was hampered by the war situation that existed in 1975–2002. As a result of rising oil exports, the country has experienced very strong economic growth during the 2000s: the oil industry accounts for about 50 percent of GDP and 95 percent of the country’s export revenues. But the unilateral dependence on oil also makes the country’s economy vulnerable to changes in world market prices, which became clear in 2014 when this was halved. 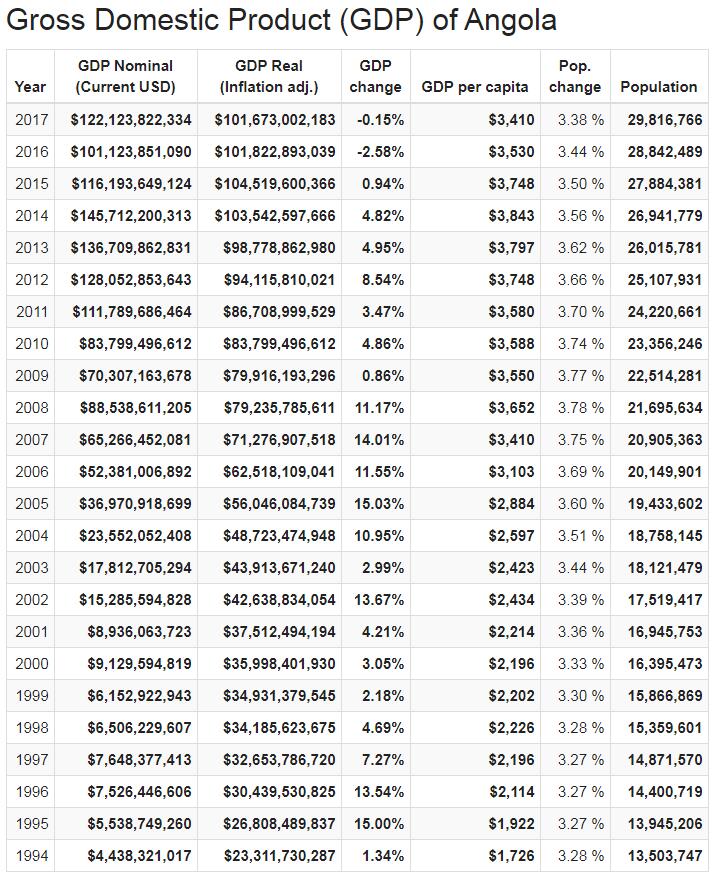 In the years before the global financial crisis of 2008–09, the country experienced strong economic growth, averaging about 20 percent in 2005–07. Growth dropped drastically as a result of the financial crisis but has recovered somewhat and has averaged around 5 percent during the 2010s. However, low oil prices have meant significantly lower export income than before.

Although the country is the second largest oil producer in sub-Saharan Africa, the profits from the oil industry have so far benefited only a small minority of the population. The extraction is largely done in collaboration with foreign companies and employs few Angolans. Some efforts have been made to rebuild the destroyed infrastructure, but otherwise oil revenues have not led to any major improvements in the population’s living standards. Still, about 2/3 live in poverty (below US $ 2 per day) and especially in rural areas, the vast majority of people lack access to clean water and electricity. According to countryaah, the country’s widespread corruption is a major obstacle to the country’s economic development.

At independence, many Portuguese left Angola, which meant that the country had a shortage of educated labor. As a result of the economic growth of Angola in the 2000s and the economic crisis in the former colonial power Portugal, in the beginning of the 2010s many Portuguese people were attracted to Angola and the construction boom underway. Angola has also made major investments in Portugal. In the long term, Angola has better economic prospects than most other African countries.

Agriculture employs about 85 percent of the population, but most of them are engaged in small-scale self-catering cultivation. Food needs are largely covered by imports and a large part of the population is dependent on emergency aid.

Angola has a very large agricultural potential and was previously a major net exporter of agricultural products. Important export crops were coffee, sugar, cotton and sisal. Nowadays, exports are very limited, and the country is almost entirely dependent on imports to feed the urban population. The base crops are maize and cassava. Commercial agriculture ceased virtually when the Portuguese left the country in 1975-76. The state took over the farms, but production went down, and the land was later distributed to small farmers. The civil war of 1975–2002 had a devastating effect on the peasant economy. Farmers were forced to flee, the cultivated area was reduced and transport was made more difficult. After the end of the civil war, many people resumed farming, but questionable ownership and consequences of the war, such as the existence of landmines, makes the construction of the agricultural sector slow. Livestock breeding is significant in the southwestern provinces, which are spared from the tsets fly.

One of the largest natural forest areas is Maiobe’s tropical rainforest in the enclave Cabinda, with mahogany and other noble woods. Eucalyptus and conifers cover 140,000 ha. However, timber exports have stopped after independence.

Angola has a 1,650 km long coastline with rich fishing waters in the south thanks to the Benguela stream. Fishing was hit hard by the civil war, when industries were abandoned and the Portuguese sailed away with most of the fishing fleet. Rehabilitation is ongoing, and in order to meet the country’s need for fish, foreign vessels fishing for licenses must land part of the catch in Angola.

Angola is very rich in minerals. Before the oil became the most important export product, diamonds and iron ore were the largest export goods after coffee. Mining decreased after independence. Iron ore has not been mined since 1975, when the Kassinga mine was partially destroyed. Projects for the resumption of iron ore mining and the opening of ironworks have been ongoing in recent years. During the Civil War, diamond production varied greatly, but after 2002 production increased substantially for a few years; the country is now one of the world’s largest diamond producers. Angola also has deposits of copper, magnesium, gold, phosphates and uranium.

Oil has been the country’s main export commodity since 1973 and accounts for about half of GDP and about 95 percent of total exports. The state-owned oil company Sonangol gets its revenues from cooperation and production sharing agreements with major multinational companies from primarily the US and China. Cabinda is the most important production area. Angola is the second largest oil producer in sub-Saharan Africa, only Nigeria is larger. Production amounted to 2 million barrels per day in 2008, but has subsequently declined due to technical problems.

Angola also has large deposits of natural gas, but these are exploited to a very limited extent. In 2013, natural gas that was frozen in liquid form (LNG) was exported for the first time, but the production plant was closed the following year due to technical problems and was not expected to open again until 2015 or 2016.

The civil war severely damaged electricity generation and much work still needs to be done to rebuild the infrastructure. After all, thanks to the upgrading of several hydroelectric power plants, electricity generation has increased, but a large part of the country’s potential for producing hydropower is still untapped.

Only about 30 percent of the population has access to electricity, and these people meet their energy needs mainly through the burning of firewood, charcoal and animal waste. The poorly developed electricity grid and the many power cuts are an inhibiting factor for the industry as well.

Compared to Africa in general, Angola’s industry was previously relatively well developed, but was severely affected by the civil war in 1975–2002. Productivity dropped drastically and the country experienced a large shortage of educated labor. The heavy industry included former steel, shipyard, pulp and cement industries as well as the country’s only oil refinery in Luanda. Most of these stopped working or worked very sporadically during the war. Nowadays, only the food industry, the oil refinery and the oil-related industry, as well as the industry associated with the extensive reconstruction work, remain.

Crude oil accounts for about 95 percent of the country’s exports. Other exports consist mainly of diamonds but also of refined oil, natural gas, coffee and timber. In the past, imports have been severely cut, but have increased greatly in recent years. Mainly, machinery, vehicles and spare parts and food are imported. China and the United States are the largest market for oil exports. Other important exporting countries are India, South Africa and Portugal. Imports come mainly from Portugal, China, the United States and South Africa.

Most of the population, with the exception of urban dwellers, produce the food they eat. They eat two meals a day, lunch and dinner, and breakfast usually consists of just a cup of tea or porridge. The food is prepared by women and girls, while men and boys over 12 do not enter the kitchen, […]