Since independence, oil and gas extraction has been the backbone of the economy; the sector accounts for more than half of central government revenue and as much of GDP. In addition to the oil and gas sector, there is a relatively large heavy industry (steel mill, cement industry and petrochemical industry) as well as some lighter industry (textile and food industry). Algeria was for a long time a planning economy, where the state owned or controlled all major economic activities, but after financial problems in the 1980s and 1990s, large parts of the business sector were privatized. In connection with the privatization, foreign investment in the country increased, primarily invested in the oil and gas sector. Algeria has for a long time had a large foreign debt, but thanks to high oil and gas prices during the 00s, the loans were able to pay off. 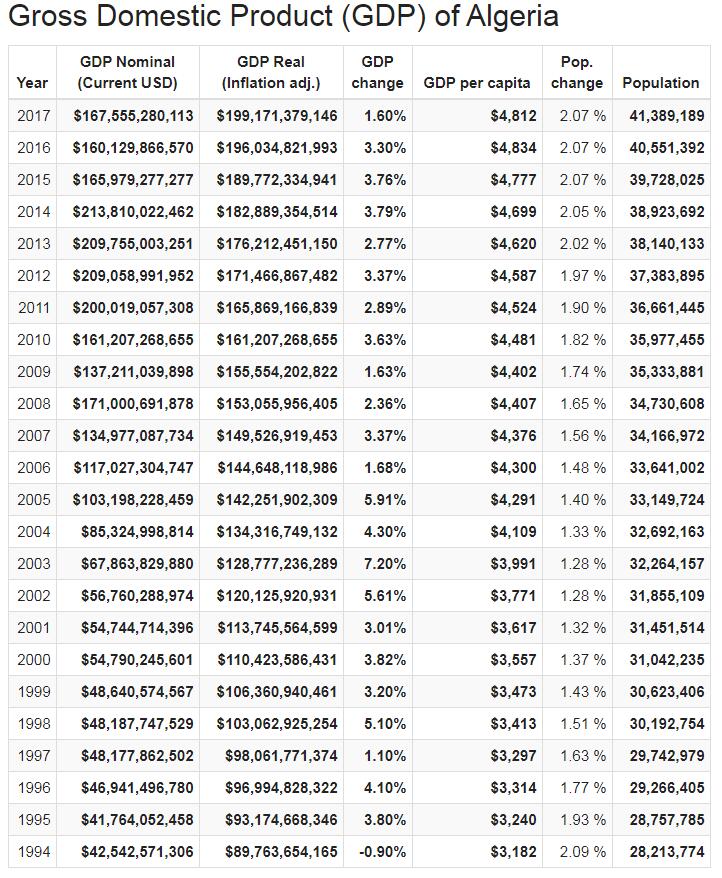 Since Algeria became independent in 1962, the land owned by European colonists was nationalized, and they were run as collective farms under the leadership of workers’ committees. However, production declined drastically, and the government has been trying to promote agriculture since the 1980s by giving back to the previous owners the farms that were nationalized in the 1970s. Land that was nationalized at independence has been sold to private interests. Most of the country is unsuitable for agriculture, which has therefore been concentrated on the northern coastal strip. The cultivation area is 7.5 million ha; more than 50 percent is disposed of by the state, which accounts for 3/4 of the production. Grapes are the most important product. Other important crops are wheat, barley, oats, corn, citrus fruits, dates, olives and tobacco. The development of agriculture is hampered by erosion,

Algeria has mainly pine forests, but large forests of cork oak have made the country the third in the order of the world’s cork producers. The wooded area has declined sharply in recent decades. However, ambitious forest planting programs have been started since 1975, among other things to counteract the spread of the desert to the north. A “green belt” of pines and cypresses, 20 km wide and 1,500 km long, is planted along the northern desert border, from the Moroccan to the Tunisian border, but the project has encountered major problems.

Algeria has rich mineral deposits and exports iron ore, phosphate, lead, zinc and antimony. Iron ore is mined at Beni Saf, Zaccar and Timezrit, as well as at the eastern border of Ouenza and Bou Khadra. The deposits at Ouenza account for 3/4 of the production, which varied greatly. Italy and the UK are the largest export markets. The most important lead and zinc deposits are found in el-Abed at the border with Morocco as well as in the Sétif region. Large phosphate deposits are found in Djebel-Onk, 340 km south of Annaba. More than half the production is exported to France and Spain. Other deposits provide antimony, mercury, copper, manganese, salt and tungsten.

Commercial production of crude oil began in 1958. Algeria produces a light oil with low sulfur content. The extraction has recently been reduced, partly to preserve the life of the deposits and partly to comply with OPEC’s recommendations. At the same time, natural gas and refined products have increased in importance. Of the oil exports, 3/4 go to Western Europe and 1/6 to North America. The most important oil deposits are found at Hassi Messaoud, Edjale and El-Gassi in the east. Natural gas deposits are found at Hassi R’Mel in the west. Pipelines lead gas and oil to the export ports of Arzew and Bejaïa, as well as to La Skhirra in Tunisia. In 2008, gas production was 77.9 million tonnes and crude oil production was 85.9 million tonnes. Most of the country’s energy supply is covered by natural gas and oil.

Algeria’s industrial sector is dominated by the mining and energy industries. Large petrochemical industry is found in Arzew (natural gas-based nitrogen fertilizers, petrochemical semi-finished products) and in Skikda (polyethylene, PVC, chlorine, caustic soda). Annaba has a phosphate, iron and steel industry. In the coastal cities, the emphasis is on the textile, food and construction industries. Heavy industry was the cornerstone of development policy until 1973; thereafter, the industry’s share of total investments has decreased. During the 1980s, the state industries, which were often run at very low capacity utilization, became decentralized, and productivity and efficiency became increasingly emphasized. Several older factory facilities have since been knocked out, while more modern industry, eg. electronics industry has grown stronger.

According to Countryaah, oil and gas account for more than 90 percent of the export value. In addition, iron ore, wine, citrus fruits and phosphate are exported. Imports mainly comprise industrial equipment, semi-finished goods, transport equipment and food. The most important trading partners are France, Italy, China and Spain. Algeria, which has a state trade monopoly, has had a trade surplus since 1979. Imports of consumer goods have been severely restricted, while some easing has been allowed for private business exports in recent years.

Business Lesotho is one of the world’s least developed countries. Although only about 10 percent of the country’s area is suitable for permanent agriculture, the majority of the labor force is employed in this industry. The main food crops are maize, sorghum, wheat, potatoes and beans. Tobacco is the most important export commodity from agriculture. […]

Business According to countryaah, Swaziland’s economy is relatively developed and diversified, but suffers from significant socio-economic inequalities. The economy is closely linked to South Africa through ownership, trade, finance and currency policy and membership in the Southern African Customs Union (SACU). Agriculture and forestry are the most important industries. The majority of the economically active […]